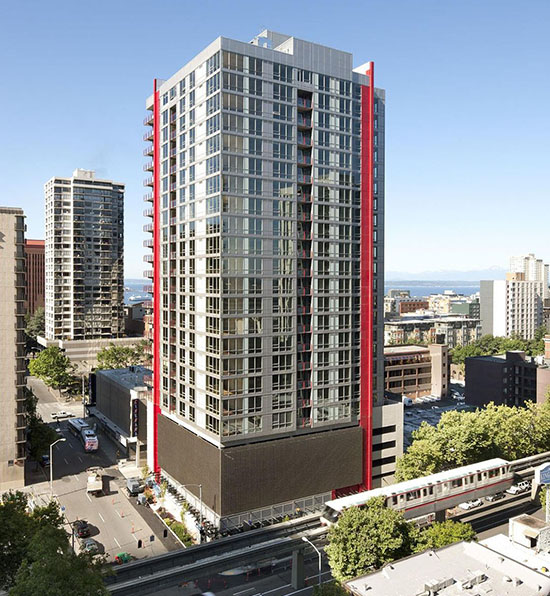 The 24-story Martin apartment tower in Seattle’s Belltown neighborhood became the first building in North America to use steel fibrous reinforced concrete as a rebar replacement for shear wall link beams in a high-seismic region.

Reinforcing congestion has long been the bane of reinforced concrete construction in high-seismic regions. The most difficult and congested reinforcing is in shear wall link beams. 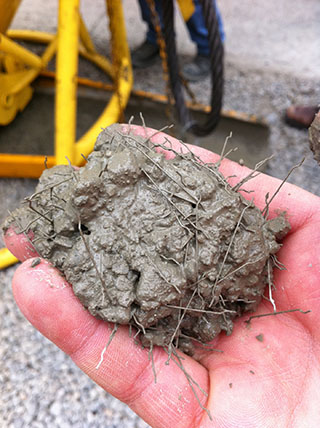 [enlarge]
Steel fibers were mixed into the concrete at the batch plant.

Shear walls provide lateral stability to a building. The strength and stiffness of a wall are compromised, however, by penetrations required for doorways and mechanical openings. The elements above the openings become highly stressed “link beams” that are critical in maintaining coupled wall behavior. Seismic strength and ductility demands in link beams are high.

Traditionally, diagonal bars are used to reinforce these link beams, combined with high quantities of tightly spaced stirrups and ties. This traditional approach is costly and time-consuming to build and causes major conflicts in rebar placing since the diagonal bars conflict with rebar in the adjacent wall boundary elements.

Steel fibrous reinforced concrete (SFRC) replaces the diagonal bars and much of the remaining steel that is required in conventional designs, providing improved strength and ductility. Further, it eliminates the serious constructability challenges contractors face in placing rebar and concrete in what are typically highly congested zones.

With SFRC, the strength and ductility of link beams is maintained even though a significant quantity of reinforcing steel — including the unwieldy diagonal bars — is eliminated. SFRC in link beams can result in up to a 40 percent rebar reduction and a 30 percent net cost savings compared with traditional link beam construction.

SFRC is not addressed by ACI 318 or the International Building Code for use in seismic link beams, so the Seattle Department of Planning and Development required two peer reviews by independent structural engineers before granting approval. SFRC link beams without diagonal bars would achieve equal or better performance compared with those in a traditional code-compliant design.

While SFRC has so far been targeted for use primarily in shear wall link beams, the success of The Martin created a springboard from which to extend SFRC into entire shear walls. SFRC as a partial rebar replacement throughout a shear wall would improve the entire wall’s constructability and increase its seismic strength and ductility.

The steel fibers were mixed into the concrete at the batch plant. After workability was confirmed at the site, a tower crane and bucket were used to place the link beam concrete while a pump simultaneously placed the adjacent shear wall concrete.