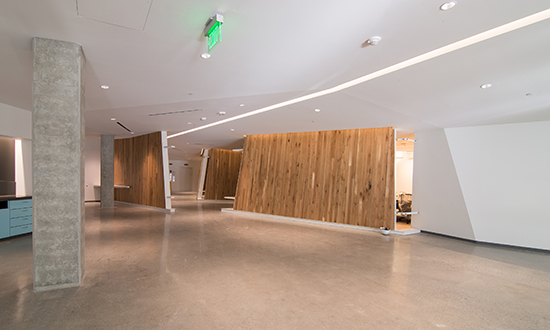 The newly renovated Microsoft buildings 16 and 17 are located on the company’s campus in Redmond.

Originally built in 1986, the building interiors were becoming outdated and needed a refresh. The two buildings are connected by a central cafeteria so both buildings had to be renovated simultaneously.

The design involved countless slopes, angles and canted features in the walls and ceilings. The buildings contain over 1,200 linear feet of light coves.

Both lobby entrances exhibit a fascinating “cube,” a 26-foot enclosed metal-framed soffit containing a motion-sensing Microsoft Kinect to create an interactive environment between employees and content on a 34-foot-high video wall. The cubes are wrapped in Barrisol, a translucent stretched fabric that creates diffused lighting for a calming effect in the busy work environment.

The project presented numerous challenges. The schedule was highly demanding, but project teams went from demolition to owner occupancy in eight months.

To minimize scheduling conflicts, coordination with the general contractor, architects, and mechanical, electrical and plumbing trades was on an hourly basis. The close working relationship between Performance Contracting and the architecture firm proved to be an invaluable asset.

In one instance, the contractor was issued Building 17 construction documents Thursday night. On Friday, dimension drawings were created by the CAD team, and printed and delivered to the site. The crews worked over the weekend and had three floors laid out before Monday morning.

Judge’s comment: “The creative design introduced many challenges for the team that framed this project. Thinking outside the box along with a keen understanding of geometry was an absolute requirement in the construction of the installed systems. Superb craftsmanship made the designer’s dreams a reality.”