Art can tie a building into the neighborhood vibe

By CARRIE A. SMITH
Weber Thompson

In the great Seattle boom of this decade — after a bust so dramatic that it caused developers and designers to rethink their place in the building universe — it seems like we have more cranes dotting our city than residents.

Those cranes are pulling skyward, building mostly apartment towers that are trying to outdo one another with amenity this, view that. But how do we, the design professionals and the development thinkers, move to create something that is not just another box of air, another kitchen-and-bath with a sky lounge and a dog run for $3.65 per square foot?

Given that all of us paint with pretty much the same brush — there is only so much you can do in plate after plate of 700-square-foot apartments — where can projects look to set themselves apart in a market that is increasingly catering to the same top-end renter?

While it may seem an afterthought, nothing lends more of an attitude or reinforces the feeling of “this is who we are” than artwork, whether graphic murals, commissioned paintings or public sculpture. Done as an afterthought, art is often nothing more than the uninspired, inoffensive landscapes and abstracts of the last just-OK hotel you stayed in. But conceptualized and curated, artwork can lend a new level of personality and placemaking to your next box of air. 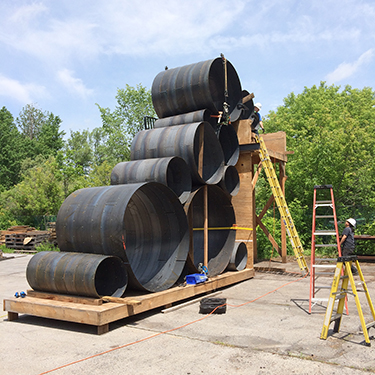 Sunset Electric, a 92-unit midrise at 11th and Pine on Capitol Hill, is a great example of how an opportunity for artwork can create a vibe that influences the community itself. In its previous incarnation, the former auto-row structure on a prime corner across from Cal Anderson Park was for years a true blank canvas for gig posters, political activism, and all manner of street art.

When Weber Thompson first started the project with The Wolff Co., we strategized about how to keep that street art vibe in place and visible while keeping it relevant to the community. All manner of ideas were discussed. We even tried to figure out how to salvage the sedimentary-rock-like poster layers, some 4 inches thick, that were pulled from the building’s exterior before work started. (Sadly, it crumpled like so much moldy paper.)

In the end, we were inspired by the street art itself, and a drink at a local bar called Liberty led us to the work of a young painter named Claudius Phaedrus.

A local resident and one-time artist on the walls of the old poster building, Phaedrus was inspired on a trip to the construction site one day, where he found the central core of Sunset Electric open to the sky. In his concept sketch, Phaedrus said that being in the building’s atrium had felt like walking in the forest, under the canopy of tall trees.

The resulting commissioned piece — formed in his signature style from cut newspaper shapes, traced in paint and ink — features a small herd of caribou, who now watch through the lobby gate to the denizens of Pine Street, from their spot on the forest floor.

Pitching a custom art piece featuring caribou to sophisticated developer clients was a first for us. Measuring some 15 feet high by 20 feet wide, the piece was installed over several days, and in true street art vibe is open to the sidewalk via Sunset’s open-steel lobby gate, creating a sense of place in a revitalized historic building. 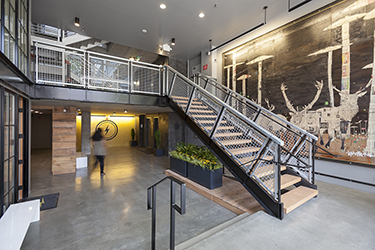 Aside from finding artists on our own while drinking at a local haunt, design teams are often inspired by collaborating with art consultants. Not just hired to pick pieces out of a catalog, art consultants are creative professionals who are deeply rooted in the local and regional artistic communities they work in.

Both Sara Everett, a project manager with Maria Barrientos, and Stacie Feinstein, an independent art consultant, have cultivated their expertise in sourcing curated and custom installations from local artists.

Everett has sourced artwork for several significant multifamily projects, including Youngstown Flats, which was notable for including artist housing and studio space in a city where rents are climbing faster than proformas can adjust. She worked with 14 local artists to commission everything from mixed media installations to metal sculpture and wood panels.

Everett’s most recent installation was for Equity Residential, which hired her to curate a collection for its Junction 47 project at Alaska and California.

West Seattle is justly proud of its strong art and artisan community, featured in the popular monthly open-studio West Seattle Art Walk, which inspired the development team to make artwork an integral part of the building’s identity. By working directly with the client and artists early in the process, Everett was able to bring artwork into the building that reflects the design, brand and marketing far more uniquely than off-the-shelf art, and at a great value.

In addition to custom pieces for the interior public spaces — including a sprawling, two-wall installation in the California Avenue lobby inspired by the notion of “junction” — Everett put out a call for artists to create installations for architectural niches at the street level building exterior. She received 37 proposals for three different locations. The development team created a short list of submissions, which were then voted on by the community.

Similarly, art consultant Stacie Feinstein works with numerous development teams and designers across Seattle, but her focus is on helping to develop an identity for each project. In 2010, she worked with Urban Partners to create the art installations and lobby gallery at Aspira, which served to activate underused retail space during the recession, but also helped create a strong identity for the apartment community.

Since then, Feinstein has worked on commissions for projects including Viktoria, Art House, Soren, Insignia, The Martin and Cirrus.

Her latest collaboration with the Weber Thompson team is for condo tower Luma, from Lowe Enterprises, at the nexus of First Hill and Capitol Hill. The project’s name, which refers to the quality of light passing through black-and-white film, came earlier than most, inspired by the building’s exterior black-and-white palette of terra-cotta and steel.

Feinstein is working with Seattle-area photographers Jules Frazier and Brent Smith to capture a series of whimsical, vintage-inspired photographs to be installed at each residential elevator lobby with illuminated light boxes. At Luma, the artwork is integral to both the architecture and the identity, to carry the concept from image to final space in ways that artwork usually can’t.

Art, of course, is not limited to a building’s interior. In the upcoming Pike Motorworks project, also by Wolff on Capitol Hill, an opportunity was created for a pair of mid-block connectors and a public interior courtyard.

Kris Snider, design principal for the landscape studio at Hewitt, commissioned an installation from sculptor DeWitt Godfrey to be made of stacked Cor-Ten steel cylinders, to create a focal point at the crossing of the future pedestrian paths. The installation, titled “Capital,” is a site-specific piece that emphasizes the relation of the form within its context, “tumbling up onto the building.”

The sculpture will help reduce the impact of these tall buildings, especially in a small interior courtyard, to a more human scale. About 18 feet tall and 20 feet long, the finished piece will be installed next month.

Snider says, “It’s sometimes hard to find artists or pieces that align (with a project) but they often surprise me, too, with their vision. They come to a project with a different set of parameters.”

This collaborative approach between artist, consultant, architect, interior designer and landscape architect strengthens the project on all scales and adds new layers to the design story. It’s a method that works especially well for urban projects as it provides a perfect opportunity for community input.

Artwork, when integrated into a multifamily environment, can be a way to build out a brand and integrate an authentic sense of identity rooted in the community. As Feinstein puts it, “a collection of art and ideas brings a soul into the community spaces of urban living.”

For most projects, custom local art is the extra twist that differentiates, attracts tenants, draws community support, commands higher leases and creates a place people want to come home to.

Carrie A. Smith is the interior design principal at Weber Thompson. She has more than 20 years of experience working across many disciplines, creating memorable interior environments that meet the unique needs of each project.