The problem is not exclusively the environment. Nature has been doing its thing for billions of years. The real issue is the impact of human development on the environment and its consequences for us, the people who rely on those resources for our health, wealth and happiness.

A question of competitiveness?

When you think about the importance of clean water to our regional economy, our recreational pursuits and above all, our health, it becomes clear that we have a choice: act now to preserve the resources we rely on, or risk ending up the victims of our own success. The downside is diminished water supplies, degraded recreational opportunities and people leaving to seek their fortunes elsewhere. Remember the famous “Will the last person leaving Seattle turn out the lights” sign? 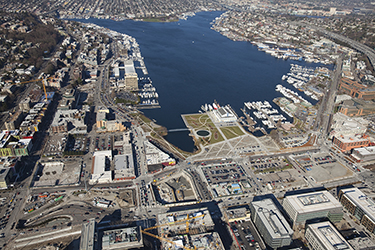 Photo by Soundview Aerial [enlarge]
Using electrocoagulation processes, GLY was able to discharge 113 million gallons of water into Lake Union that were cleaner than the existing lake water.

The construction industry is energy and waste intensive and can have a tremendous impact on the region’s ecosystems and natural processes.

As GLY Construction vice president Mark Kane points out, “Everything we do leaves a footprint — either positive or negative. We get to choose which it will be.”

With this in mind, GLY is teaming with Stewardship Partners to help roll out the group’s Salmon-Safe initiative. As a company full of fishermen and women and outdoor enthusiasts it was pretty easy for us to make the connection between what we do at work and the impact it might have on what we do at play. But not even we had realized the full scope of the issue until we invited in some experts, colleagues and partners to further explore what we can do to safeguard our region’s future.

To put it in context, here are some facts about the “environmental” quality of Puget Sound:

• Millions of pounds of toxic pollution flow into the sound each year.

• A major source of pollution is stormwater runoff from paved, developed land.

• Transient and southern resident orcas are considered to be among the most PCB-contaminated mammals on the planet and our harbor seals are seven times more contaminated than their neighbors in Canada’s Strait of Georgia.

And here’s the value of the economy that relies on a healthy Puget Sound:

• The regional fishing industry provides 16,374 jobs, $540 million in personal income for regional fishermen and women and $1.6 billion in state revenue from fishing, processing and distribution. It is also in rapid decline.

• The Puget Sound tourism industry is valued at $9.5 billion a year, with hundreds of thousands of people drawn to its waters and shorelines.

• There are 2.2 million private sector jobs in the region accounting for an annual payroll of $102 billion. Many of the region’s employers locate here because our regional lifestyle is a top draw for recruitment and retention.

Cause for alarm; not despair

The state Office of Financial Management anticipates that 5.1 million people will live and work in our region by 2020, a net increase of 700,000 people. That means a whole lot of new development and, if we don’t change our ways, millions and millions more pounds of toxins flowing into the sound.

But there is good news. Transforming our urban hardscapes into more permeable, fish-friendly, climate-resilient systems is not rocket science. Nor is it expensive. And, the best news of all, it creates far healthier, more attractive and livable environments for the region’s residents.

Back to the future

The Pacific Northwest’s old growth forests were the perfect engines for intercepting, storing, infiltrating and evapotranspiring (fancy word for losing water from the soil) almost all the rain that fell in the region. Stormwater runoff was rare, spread out, slow and clean. Stream habitats offered diverse spawning, feeding, resting and migrating opportunities for native salmon populations.

The urbanization practices of the past decade turned that picture on its head, but setting it right is a simple question of integrating these highly efficient ecosystem services with the design and development of our future cityscape.

Vulcan Inc.’s “Vulcan Blue” program is a company-wide initiative that aims to reduce the company’s impact on local watersheds and ocean habitats.

For Jim Broadlick, senior director of design and construction at Vulcan, Salmon-Safe is the most powerful way the real estate group can contribute to the initiative. It has pushed the group to think beyond LEED and continues to shape best-practice thinking.

The development of the Allen Institute was an opportunity for GLY and Vulcan to explore the possibilities of the program and it yielded some unexpected financial benefits.

Employing electrocoagulation processes, GLY treated water on site and achieved zero sediment runoff from this formerly contaminated, urban site. About 113 million gallons of water, cleaner than the existing lake water, were discharged directly into Lake Union instead of the sanitary sewer system.

As an unanticipated benefit, Vulcan realized a $1.7 million savings in project costs.

Water, energy, salmon, urban development, health and economy are inextricably linked. These big, complex issues require an equally intricate combination of skills and approaches to solve them. More than anything, the Salmon-Safe initiative is about working together to create conditions that mimic the world in which salmon evolved.

The prospect of collaborating with many different people from many different sectors to solve a common problem with the greater good in mind is one of those opportunities that give our work real meaning and purpose — and the benefits accrue across the board.

There is still much to learn and companies like Vulcan are investing time and energy in understanding the science better. Considering the built environment’s impact on water quality requires that we improve things like material selection (certain cladding materials permitted under LEED standards transform into pollutants when they leach into the groundwater) and building performance (how can a building provide an ecosystem service?) and create more responsible development practices.

At Vulcan’s urging, GLY became a Salmon-Safe certified contractor, one of just three in the Puget Sound region. Now Vulcan is piloting a similar program for Salmon-Safe developer certification.

About 40 percent of the existing city space in both Portland and Seattle will either be developed or redeveloped in the next 20 years. Could all this development actually go beyond net zero impact and have a positive, regenerative impact on our cities?

Portland Mayor Charlie Hales has challenged every city bureau to achieve Salmon-Safe certification, transforming how Portland impacts its watershed. Will Seattle follow suit to ensure we get the future we want — not the one we risk being handed by default?

Jill Jago is an independent communications strategist and “embedded” consultant at GLY Construction.