By MIKE SHIELDS and SCOTT WOLF
Special to the Journal

It’s no secret that South Lake Union is in the midst of an unprecedented transformation. Underdeveloped properties are giving way to new buildings, which in turn are creating vibrant streetscapes and bringing quality jobs, throngs of people and new life to a neighborhood long awaiting its rebirth.

Once tunneling machine Bertha finds her groove again and makes her way north, the gash through the city created by SR 99/Aurora Avenue will begin to heal. South Lake Union will finally be connected via pedestrian and bike-friendly streets to the Seattle Center, the Uptown neighborhood and the Elliott Bay waterfront.

333 Dexter — the last remaining full block site in South Lake Union and currently occupied by King 5 News — lies between Thomas and Harrison streets. The site will soon be transformed by a new 580,000-square-foot mixed-use office building that will provide an estimated 5,000 high-tech and retail jobs, and establish permeable street edges and generous open spaces to create a vibrant, pedestrian-oriented streetscape in what has been one of the city’s most heavily used vehicular corridors.

Kilroy Realty Corp., a 68-year-old development company with long-term ownership in a number of Seattle-area commercial properties, will be undertaking its first ground-up development in the Puget Sound region with its 333 Dexter project. 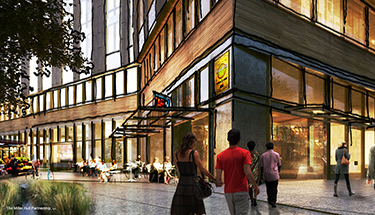 In the Puget Sound region, Kilroy owns and manages about 2.1 million square feet of Class A office space that houses some of the region’s most dynamic and innovative technology companies, including Concur, Tableau and Microsoft.

Kilroy’s projects provide collaborative workspaces for many of the world’s most significant creative and tech companies.

When asked about the decision to undertake this project, Kilroy Realty President and CEO John Kilroy said, “Many of our Bay Area creative and tech tenants have been planning a strategic expansion into the Pacific Northwest. We’d like to create an innovative, forward-thinking office project in Seattle that will provide these types of companies with the opportunity to attract top talent and expand their services in this amazingly beautiful place.”

Kilroy’s projects are recognized by tenants and neighbors as enhancing the quality of life in the surrounding community.

“Our projects go beyond being individual residential, retail and commercial properties, as they are more about creating neighborhoods and communities with walkable streets and active ground planes that provide easy access to services and amenities such as parks, shops and restaurants,” John Kilroy said.

“We understand how environments shape human creativity and productivity, and South Lake Union is our kind of area,” he said. “We embrace Seattle’s focus on walkability and sustainability — it is a natural project for us.”

Beyond the property line

The Aurora/Dexter corridor represents a significant opportunity as a next-generation work location that has been hidden for decades. After years of planning and concerted involvement from developers, organizations, planners, and state and local agencies, the South Lake Union area is now emerging as a vibrant community.

Following the completion of the new SR 99 tunnel, surface street improvements will stitch several of South Lake Union’s primary east-west streets across the revamped Aurora Avenue, which is expected to have more of the character of a slower-paced downtown city surface street such as Fifth Avenue.

Two of those east-west arterials that will continue through SR 99/Aurora are the streets that border Kilroy’s site on both the north (Harrison Street) and south (Thomas Street). Signalized intersections will slow traffic, well-placed transit stops will encourage use of public transportation, and improved rights of way will create a better pedestrian and bicycle environment. 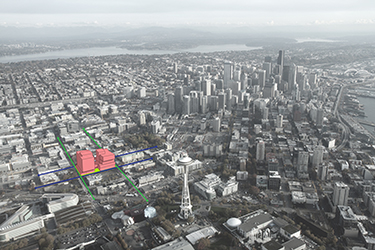 Within this context, and by capitalizing on the larger urban design goals for the area around the site, the project will not only create new office and retail space but help to make the connection from South Lake Union to the Seattle Center along Thomas Street, a designated Green Street and an important link on the emerging Lake-to-Bay Trail.

333 Dexter will provide street-level retail and food services targeting small businesses, as well as interior and exterior open spaces that will encourage collaboration between diverse inhabitants and the rapidly densifying neighborhood.

A through-block connector will link Dexter with a new RapidRide bus stop on Aurora Avenue at Harrison Street — the last in-city stop for buses departing downtown to points north, including communities in King and Snohomish counties.

Office of the future

Kilroy recognizes that the workplace of tomorrow differs significantly from the workplace of the past. A company’s need for workspaces that create opportunities for interaction and collaboration are becoming increasingly important. To translate these goals into design, Kilroy retained an experienced design team led by The Miller Hull Partnership.

The team recognizes that a large percentage of high-tech employees are millennials who expect well-executed, large-scale, flexible and daylit spaces to accommodate a range of needs over the course of 10- to 12-hour workdays. Offices are being designed to favor collaboration areas over individual offices in response to tenant demands. Raw, creative and reconfigurable space capable of serving a single or multiple tenants with large open bays and generous windows will allow maximum daylight and flexibility.

333 Dexter is characterized by two distinct towers: an 11-story “active” tower to the south and a 12-story “quiet” tower to the north, each with 24,000-square-foot floor plates. The towers will be joined on three floors at the podium level across the east-to-west through-block connector, providing an opportunity for a tenant to occupy 60,000 square feet on a single floor.

Setting back from the allowable building lines on both Thomas and Dexter enables generous and sunny open spaces that support street-level uses and retail shops.

The site’s proximity to the Space Needle and its water and mountain views quickly emerged as a primary driver of design with regard to orientation and massing. With a glazing ratio in excess of 40 percent and generous open-air roof decks, tenants will be visually connected to the water, mountains and neighborhood from all points in the building.

While the fact that many large high-tech companies are migrating outside the central business district is no longer surprising, developing Class A office space in a new sector must address the needs of a contemporary workforce and provide a place that will be full of life to attract forward-thinking companies.

Kilroy expects 333 Dexter to provide a model workplace that promotes productivity for world-class tenants, and contribute to the revitalization of the South Lake Union neighborhood.

Miller Hull founding partner David Miller said, “The quantity and scale of development in South Lake Union is changing the face of our city, and we commend Kilroy for placing high-quality design, advanced sustainable design strategies and a commitment to improving urban connections among its top priorities for this project.”

The project is in the city pipeline for early design guidance and is in the purview of the West Design Review Board. Kilroy expects to begin construction in 2016, with occupancy in 2018.