Preserving the soul of a Seattle neighborhood

By SAM HART
Special to the Journal

For better or worse, Seattle residents are famous for their sensitivity to changes in their neighborhoods. When the old Laundromat down the street gets torn down, we want to know what’s going up in its place. We demand information; meetings; participation. And with each new project there’s an almost palpable anxiety in the community, often in the form of the hanging question: How will this change the character of the neighborhood?

This question of preserving neighborhood character comes up again and again in Seattle’s many single-family dominated residential neighborhoods — and more so now as the city continues its boom of incoming residents and rising construction cranes. While the sentiment usually comes from good intentions, the phrase “neighborhood character” often gets misused as an argument for fighting any new development whatsoever. What we have here is special, goes the argument, please don’t take that away from us.

This argument often proves problematic for two reasons. First, it treats a given neighborhood as if it is monolithic and should be cast in bronze — which is a surefire way to fast-track a community towards inflexibility, exclusivity, and, ultimately, a loss of the spirit that was trying to be preserved in the first place. 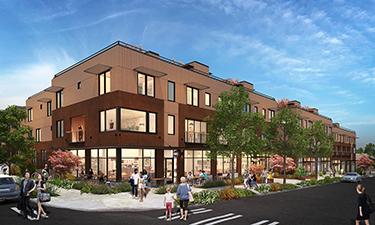 Second, the argument ignores the fact that Seattle has undergone massive changes over the past hundred years alone — which is not very long when you look at the lifespan of a city. If anything, the character of Seattle’s neighborhoods is rooted in their consistent evolution.

But putting these issues aside, there’s still a lot that’s worth considering when the conversation turns to the idea of “neighborhood character.” At our best, we use these words to talk about how we understand that there’s something special about where we live. We know that Seattle is exceptional not because of its mere merit of being a city alone, but because it has a culture and soul unique to itself.

In the fields of development and architecture, this brings us to a tough and important question: How can we design projects that both expand and improve a neighborhood while still paying homage to the spirit of the community?

One of our latest projects has given us a great chance to engage with that question. Located in the Ravenna-Bryant neighborhood in Northeast Seattle, developer Polygon Northwest has teamed with Johnston Architects to create Bryant Heights: a 165,000-square-foot site that will ultimately include 14 houses, 39 townhomes, 28 condos, eight live-work units, and 6,500 square feet of commercial space.

As a large project in one of the city’s smaller, mostly residential neighborhoods, this is an important development to get right. Doing so means understanding the context of the site and the character of the neighborhood that goes with it.

Historically, Ravenna-Bryant has seen as much change over the past century as any neighborhood in the city of Seattle. Before it was annexed by Seattle in 1907, the town of Ravenna was not much more than a rail depot and a smattering of houses on the outskirts of the recently relocated University of Washington. A sizable portion of what would become Ravenna-Bryant was still covered in old-growth forests.

As the neighborhood evolved over the years, the community never completely lost an element of that backwoods spirit. Ravenna Park was maintained as a small wilderness in the heart of the urban landscape, and neighborhood activists repeatedly stepped up to ensure that the wooded space was not only preserved but improved upon. And the old railway, although now long gone, is being brought back in spirit by the soon-to-open light rail station in nearby Roosevelt. 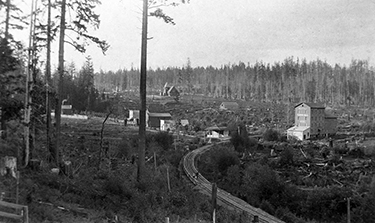 Image courtesy of HistoryLink.org [enlarge]
In 1893, the town of Ravenna was surrounded by trees. Seattle Flour Mill is on the right.

These are only a couple examples of the ways that Ravenna-Bryant has gracefully embodied a tradition of change that simultaneously carries a spark of the past along with it. Bryant Heights was designed to continue that tradition.

The development saves several exceptional trees for the layout, which is a straightforward way of preserving part of the community. But the project also employs new methods of sustainable and environmentally focused design, including a rain garden, green roof, recycled content and an emphasis on environmentally friendly building materials.

All of these design elements come with new construction, and yet they are integral to the idea of preservation. Aesthetically, they blend the buildings in with the regional flora, eschewing standard modernism for a feel that explicitly resonates with the Pacific Northwest. And on the practical side, these elements help us preserve and maximize useful resources.

Perhaps one of Bryant Height’s most important aspects is its layout as a complete community. By increasing density and incorporating both residential and commercial development on the same site, Bryant Heights takes a strong first step in transitioning the neighborhood into a true urban village — enhanced in part by the adjacent commercial zone on 35th Avenue Northeast, good access to transit, and several schools within walking distance.

While it can seem like a difficult task to mix all of these different elements together, Bryant Heights excels in its use of current zoning to gracefully transition from its higher density segments along Northeast 65th Street to the single-family housing along the other side of the site. As each building responds to one another through similar textures and design elements, the underlying spirit of the development becomes apparent: this is a community that is designed to aesthetically and functionally translate across itself and into the surrounding neighborhood.

In these ways the newest, biggest changes to Ravenna-Bryant may actually be bringing the neighborhood closer to its true character than it has been in the past several decades. With the proper mix of density, residential, commercial, and open spaces, the community can only become more alive — and perhaps harken back to the days before Ravenna-Bryant was even the town of Ravenna.

In truth, the neighborhood has been inhabited between 8,000 and 10,000 years, almost exclusively by members of the Duwamish tribe. Long before the days of mid-20th century suburban sprawl and exclusionary zoning, people lived here in complete communities; places whose layouts may have resonated more with mixed-use and live-work developments like Bryant Heights than long rows of single-family housing that have recently dominated many of Seattle’s neighborhoods.

As we enter a new stage of growth for our city — and with it a new update to the city’s comprehensive plan for new development — Bryant Heights might be used as a microcosm for changes that must happen city-wide. By retooling our neighborhoods to increase urban density and implement sustainable architectural practices, we stand a better chance at preserving the parts of a community that are worth preserving. This is how you keep neighborhood character alive and well.

Sam Hart is a freelance writer and editor based in Seattle. As a former communications specialist for the city of Seattle and the son of Mary and Ray Johnston of Johnston Architects, Sam enjoys researching and writing about the various intersections between urban design, development, architecture and culture.