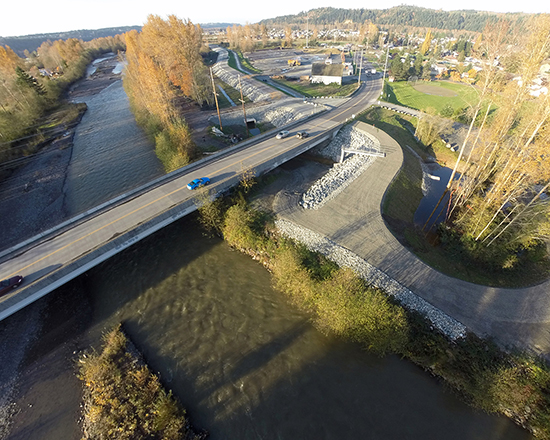 Photo courtesy of Parametrix
Parametrix helped develop a 1.6-mile-long setback levee for the city of Orting.

The city of Orting had suffered terrible flooding over the years, including seven federally declared flooding disasters since 1990.

The Pierce County city is nestled in the foothills of Mount Rainier between the Puyallup and Carbon rivers. Although levees had been built in the 1930s and 1950s along both rivers to protect the city, the levee on the Puyallup River was not FEMA-certified and provided minimal protection during high-water events.

As Orting’s on-call engineering firm for over 30 years, Parametrix was brought in to help develop a long-term solution. That solution: Build a 1.6-mile-long setback levee that would protect the city and reconnect 46 acres of floodplains and 55 acres of backwater/streambeds to the middle Puyallup River main stem, restoring salmon habitat for three Endangered Species Act-listed species.

But how does a small city like Orting — with a population of 7,200 and a $2.5 million annual budget — generate funds to pay for this $19 million project?

The city and Parametrix doggedly pursued funding from half a dozen different agencies. One federal agency finally agreed to participate: the U.S. Department of Agriculture Office of Rural Development.

The city of Orting and Parametrix worked hard to develop trust between the city and all stakeholders and agencies. The Puyallup Tribe was a huge supporter through this entire project.

The new Calistoga Setback Levee was built between March and October of 2014. A sediment transport study had been completed during the planning stages to project where the bottom of the river would be in 15 to 30 years in order to determine how high the levee needed to be. The new levee was built to projected 2026 levels with an additional three feet of protection.

The wider channel would provide the area needed for the river to spread out while lessening the flooding impacts and damage to downstream cities that also were severely impacted during previous floods. The project reconnected the 46 acres of floodplains to the Puyallup River, restoring natural riverine processes and creating off-channel habitats for salmon. Another 55 acres of side stream habitat were reconnected through a series of fish-passable culverts and log structures.

The project also has added four more public shoreline access points and 1.6 miles of trails atop the levee connecting to the regional trail system via city sidewalks.

Once the levee is certified by FEMA, approximately 1,100 homes will potentially be removed from the 100-year floodplain, lifting the requirement that homeowners carry flood insurance. These factors have a direct impact to the local economy of between $1 million and $1.5 million.

The new levee was substantially completed one month before the fourth-highest flow since 1962 came down the Puyallup River in November 2014. Not a single sandbag had to be filled and no evacuations were required. In fact, the city did not suffer any flooding.

Orting Mayor Joachim Pestinger said, “Parametrix was right there, side by side with city staff, anxiously awaiting the outcome. The levee passed with flying colors.”