Prior to the project, polluted runoff during wet weather was released into Venema Creek at the top of an 80-foot sand cliff feeding into the fish-bearing Piper’s Creek.

Seattle Public Utilities determined the best approach to improve stream habitat was to mimic natural stream hydrology by installing a combination of bioretention cells and underground injection control wells. Multiple technologies were combined in this project to try to restore the hydrology of the creek back to its natural state.

As prime consultant, OCI collaborated with SPU engineers to design a new roadway, conveyance system and green stormwater infrastructure across 60 feet of right of way for five residential city blocks.

The new system conveys stormwater runoff from about 80 acres to a cascading system of bioretention cells located in the right of way. There, the water is cleaned and treated before being collected by underdrains and routed to one of three underground injection control wells. 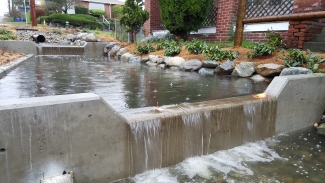 SPU engineers worked alongside the OCI team to collaboratively design the project, which allowed SPU engineers to be mentored in using new roadway design tools. OCI also worked closely with the city’s maintenance department, which resulted in assured accessibility to the bioretention cells and the underground injection control wells for cleaning and minimizing fine sediment leaking into the underdrain system.

The project created right-of-way improvements that provide a safer environment for residents as well as more attractive streets. The combined effect of traffic calming with narrower streets, new sidewalks and ADA-compliant ramps has improved pedestrian safety along these rights of way. Trees and plants that are a part of the natural system design and inherent in the design of bioretention cells help to improve the aesthetics of the corridor as well.

“The team was very responsive to our needs and was helpful in maintaining a positive and respectful relationship with the neighbors surrounding the project area,” according to Masako Lo, senior civil engineer for SPU.

“This project was a successful example of a collaborative effort between SPU and consultants to meet the project goals of improving Broadview’s drainage, protecting the health of Venema Creek, and providing street right-of-way improvements.”