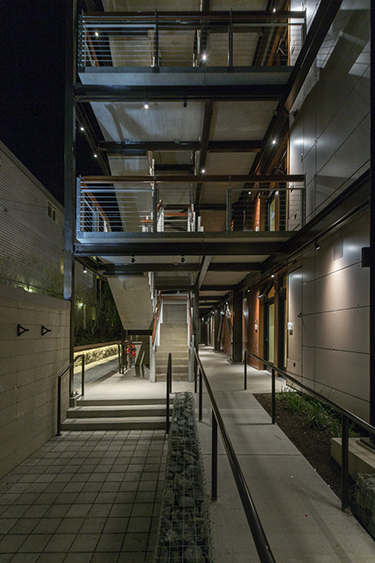 The structure was built in 50 percent less time than traditional vertical construction projects.

The challenge was to build a six-story multifamily apartment structure on a tiny urban site in the already dense University District in Seattle. It had to be built quickly and cost-efficiently, with green features and great livability.

DCI Engineers partnered with Sustainable Living Innovations to make it happen. The project, called 47 + 7, is the first high-tech building of its kind on the market.

It’s constructed from SLI’s proprietary panelized construction technology, consisting of prefabricated “sandwiched” panelized wall and floor systems, and containing all plumbing, electrical, fire sprinklers and finishes. In addition, a “kit of parts” shipped from an off-site manufacturer to the job site allows easy assembly of the structural connections — similar to an erector set.

Building on such a small urban site would usually be deemed cost-prohibitive when applying traditional linear construction practices. SLI wanted to integrate a streamlined way of building quality housing resembling a simplified assembly process. They also wanted column-free interior spaces so the apartments appear much larger.

As a result of these innovations, 47 + 7 is a highly sustainable and sleek modern building that does not appear manufactured like portable model housing. It is made primarily of concrete, steel and glass, and no drywall systems were installed. There is hydronic radiant heat flooring and insulated walls.

The building has 24 total units, with four living units per floor. It was built in 50 percent less time than traditional vertical construction projects.

“DCI brought a holistic involvement to the business partnership,” said Rick Osterhout, executive vice president of SLI. “Long-term collaboration between the two firms was evident throughout the proof-of-concept to final design phases of the project.”