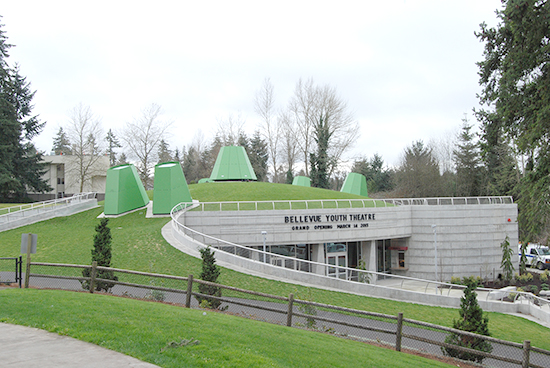 Photos courtesy of WACA
The lawn grows on a cast-in-place concrete topping slab covered by 18 inches of soil.

Designing and constructing a 12,000-square-foot, dome-shaped theater into a hillside not only presents challenges, but also demands good math skills. Meeting those challenges resulted in an environmental sculpture that is seamlessly integrated into the Bellevue’s Crossroads Park.

Each beam had to be manufactured within exacting tolerances, and every angle had to be precise in order to put this complex puzzle together and bring the project to fruition. The resulting structure looked much like a mini-Kingdome once all the beams were in place.

The precast concrete roof system with a poured-in-place concrete topping slab had a definite cost benefit to the owner.

Precast 8-inch hollow-core planks were easily cut at an angle, so there was no waste, because the opposing plank angles all matched on each row of planks.

The exposed concrete walls, visible to the public, were cast in place with Symons 3/8-inch striated random form liners.

All other bearing/retaining walls were cast with a smooth surface.

The theater’s “living roof” consists of a 3-inch, cast-in-place concrete topping slab, 18 inches of soil, and grass. The roof membrane has a leak-detection system capable of sending text messages alerting personnel to leaks, including the location to within a foot of the leak.

Overall, the precast beams fit together like a glove. Using precast for constructing the theater saved months on the overall schedule.

The project has received a LEED gold certification.