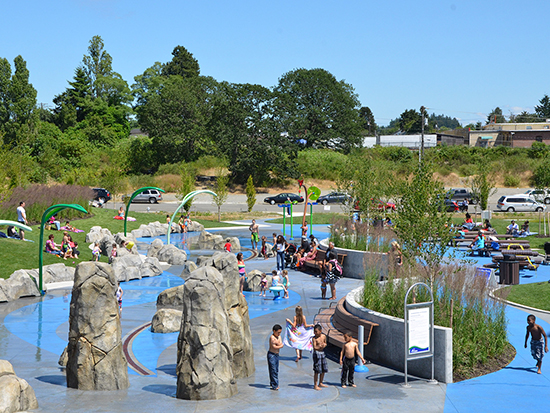 Photo courtesy of WACA
Most of the work for this Tacoma spraypark was completed amid freezing temperatures and record-setting rainfall.

The park opened in June 2014 and includes over 15,000 square feet of hand-seeded blue glass to create a sparkling water effect.

The use of recycled blue glass provides a durable and safe texture for the sprayground surface. The designer, Bruce Dees & Associates, incorporated the existing topography to create a unique appearance that highlights the decorative concrete surface.

The major difficulties and challenges included the layout and weather.

With over 9,000 lineal feet of construction, the layout was extremely critical to maintain all standard concrete jointing, doweling and expansion joint practices.

Most of the work was performed during record-setting rainfall and freezing temperatures. Weather protection was extremely difficult for the general contractor.

The project also included an enormous amount of underground utilities. Belarde Co. had to use nonstandard forming techniques to complete the project without damaging the utilities.