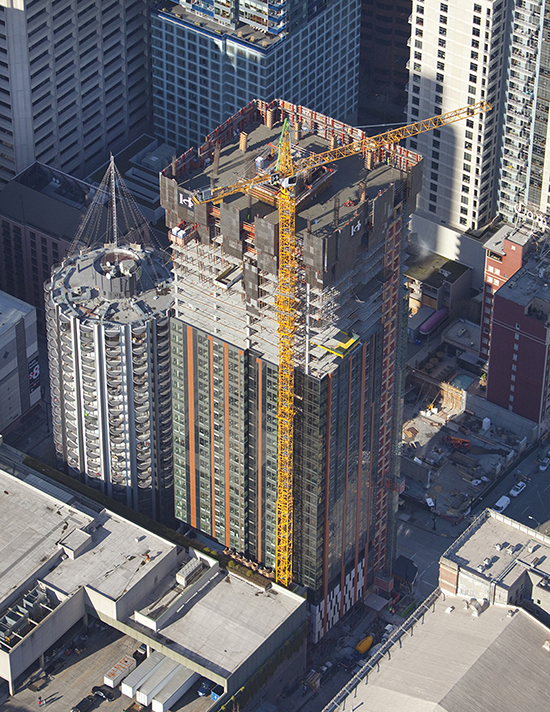 Photo courtesy of WACA
Premiere on Pine was built with high-strength concrete, allowing its columns to be smaller.

Premiere on Pine recently joined Seattle’s skyline as one of the tallest residential towers in the city. The 42-story, 490,000-square-foot structure has 386 apartments, a rooftop lounge with an outdoor terrace, a restaurant, and five levels of parking above grade and five more below.

Construction started in August 2012 and finished in early 2015.

A small site and floor plan posed significant design and construction challenges. The team responded with an efficient system that maximized floor space on a small site.

Post-tensioned 7.5-inch-thick flat plate slabs were used at all levels, including the subterranean parking levels, which created flexible interior space with open layouts. At subterranean levels, shotcrete perimeter basement walls followed construction of the slabs. This allowed slab shortening to occur prior to shotcrete wall construction.

Premiere on Pine is the first building in the Northwest to have a specified concrete strength of 15,000 pounds per square inch in its columns, reflective of steady advances in concrete materials technology. The effective use of ultra-high-strength concrete and rebar resulted in smaller structural elements than would have otherwise been required, which increased the building’s net rentable square footage.