The new Jordan Schnitzer Museum of Art at Washington State University will be more than a place to view and experience art. The design, by Jim Olson of Olson Kundig, and prominent campus location aim to increase access to the arts for the entire Inland Northwest region.

Standing as a beacon for the arts, the new museum invites WSU students and staff, school-age children from across the region, campus visitors and the community at large to experience the vitality of art at WSU. In location and design, the building brings art to the forefront of university life.

“The museum is a jewel box, and inside are treasures from creative minds,” Olson said.

“Art broadens our perspective, our frame of reference — we hope this building will do that, too.”

Located in the heart of WSU’s Pullman campus, across from Martin Stadium and the student union, the new museum’s crimson facade of mirrored glass panels reflects and weaves the building into the campus as much as it announces the presence of art.

The museum is being built by Hoffman Construction Co., with an expected completion date of spring 2018.

The project continues Olson Kundig’s longstanding relationship with WSU. In 2014, Olson Kundig partnered with Sellen Construction to design and build the Brelsford WSU Visitor Center, and the firm’s architectural staff frequently teach and serve as guest critics for the School of Design and Construction. 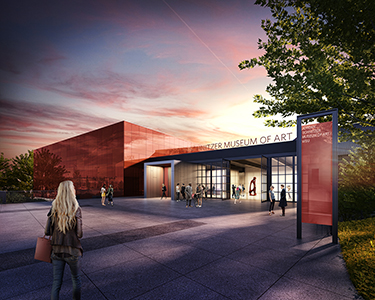 Image by Olson Kundig [enlarge]
The reflective facade has a shifting color pattern when viewed up close.

For Olson, founding owner of Olson Kundig, this project continues a lifelong commitment to the arts in the Pacific Northwest.

Prior to this expansion, the museum was limited in the scale and type of exhibits it could house in its previous location.

Beyond merely increasing its square footage, the museum sought to use this expansion to establish a more visible physical presence, giving art a stronger voice in the campus culture and the surrounding region.

The new location is in WSU’s former public safety building. The design adds 2,500 square feet of gallery space to this existing structure, using it as a tabletop for an expanded footprint totaling 16,000 square feet. The design gives new life to this familiar campus building, nodding to its former identity with large open bays that mimic the original entry modules.

With this increased footprint and central campus location, art takes a prominent place on the WSU campus and gives art a powerful voice in students’ lives. It will introduce and reinforce the legacy and value of art for students while they are at WSU and long after they graduate.

Beacon for the arts

Olson’s initial design concept for the museum was for it to have a monolithic, highly reflective facade that would grab attention from afar.

The result is a reflective crimson box that announces itself as a new beacon for the arts, holding its own next to the major campus buildings surrounding it. At the same time, Olson envisioned the reflective nature of the facade as a means of weaving the building into its context.

The challenge was to find a system to realize Olson’s design aspirations for the facade. Working closely with Hoffman Construction, the design team settled on a European facade system distributed by Hunter Douglas that consists of a mirrored back panel with a colored interlayer fronted by a glass outer layer.

Low-iron glass is being used to minimize color distortion. Weather-deflecting rain screens are installed behind the mirrored panels.

While appearing rather solid and uniform from afar, the reflective crimson cube rewards viewers upon closer inspection, much like the artworks housed within. Up close, a shifting pattern of color emerges and changes depending upon perspective and distance.

The unique facade encourages people to look at the building and see themselves and the world around them in a new way.

As Olson described it, “When students see themselves reflected in this building, they’ll see their lives through the lens of art.”

A key design challenge was balancing the museum’s dual needs for transparency and security.

The main volume is enveloped by the crimson facade, which provides an appropriate enclosure for the museum’s permanent collection. These galleries needed to meet the preservation standards of the American Alliance of Museums, a national organization through which the museum is currently seeking accreditation.

By contrast, the museum’s large glazed entrance bays allow passersby views of the temporary exhibits inside. This transparency establishes the building as an invitation — one that welcomes students, faculty, visitors, and members of the regional community to enter and explore the museum.

Jordan D. Schnitzer, the building’s namesake, was a major contributor to the project. His $5 million donation was vital in galvanizing support and bringing the new museum to completion.

“The new JSMOA is integral to the educational mission of WSU,” said Anna-Maria Shannon, interim director of the museum.

“We offer engagement with local, national and international art and artists for WSU and the surrounding communities, all while creating partnerships across campus to integrate the visual arts into every aspect of the university’s mission. The museum fosters an environment that demonstrates the transformational power of the arts.”

At its essence, the building achieves museum standards for the exhibition and display of art, while maintaining an unpretentious, welcoming character. It is a prominent yet approachable new campus icon that completes the circle of a whole university at WSU.