WSU branch in Everett will prepare students for STEM careers

Despite employing thousands of engineers and technicians, Everett has never been home to a four-year engineering program.

So in 2014 Washington State University struck an agreement with Everett Community College to share space and offer a small number of engineering degrees to students who completed prerequisites at EvCC. But demand for the degrees outstripped the limited seats, and many students continued to face the choice of moving away for their dream degree or changing their plans. 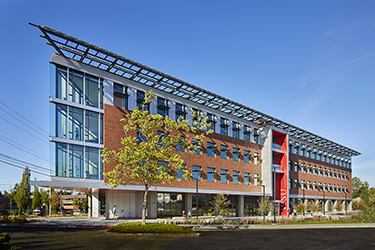 Now that’s all changed. WSU opened in August a new permanent home in Everett at the WSU Everett University Center. It’s the first step towards the goal of dramatically expanding access to higher education in the north Puget Sound region.

The educational spaces in the building reflect this mission. The labs are built to encourage exploration, with dozens of pieces of equipment students can use to fabricate, model and tinker. The building’s sustainable features set a high bar for all future developments on the site.

The moment you catch sight of WSU Everett, you sense that great ideas will be hatched here. The building’s striking facade and open windows are a gateway for the community to join in on the university’s mission.

The Innovation Forum is the heart of the building: a four-story atrium linking major entry points and providing access to the full range of activities within. The ground floor houses student services, a tiered lecture hall, a media-rich classroom and mechanical engineering labs.

Through large overhead doors, the forum is connected to the Capstone Studio, an upper-division lab providing students and industry partners a place for invention and innovation. The forum also serves as a pre-function space and a gathering place for university and community events.

The focal point in the Innovation Forum is the cantilevered wood stair. Created with regional materials by the local craftsmen of G.R. Plume Co., the wood stair is both a tribute to the storied history of the Pacific Northwest timber industry and a statement of modern engineering, combining renewable resources, creative ambition and advanced manufacturing technologies.

A typical floor on the east side of the forum includes classrooms, engineering labs and student seminar rooms. In total, there are 13 classrooms and nine engineering labs. West of the forum, three floors of offices and conference rooms wrap around a second light-filled triangular atrium, providing a place for faculty interaction and community. 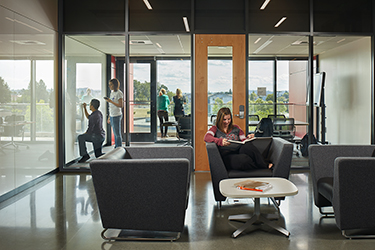 [enlarge]
Seminar rooms are available to students for small-group work.

The University Center building sought to set a high bar for energy performance, and will serve as a baseline for future campus development.

During winter months, heat energy is harvested from the building’s data center and reused in the forum’s hydronic radiant floor. A 75-kilowatt array of photovoltaic panels at the roof is dramatically exposed as the building’s cornice, cantilevering beyond the south façade.

Below the Capstone Studio is a 20,000-gallon cistern that captures rainwater for use in all the toilets and urinals from September to June, diverting the surplus to landscape irrigation.

With the University Center being the first building of the new campus, one of the toughest challenges the design-build team faced was to create a facility that would serve the long-range vision of the campus yet stand on its own.

Recognizing that the new building would establish expectations for future development, the owners required a high-performance facility with timeless character. The design of this building references the character of WSU’s home campus in Pullman while at the same time establishing its own unique identity and setting a precedent for future university development in the north Puget Sound region.

Most important, the new WSU Everett University Center opens doors for hundreds of local students who are eager for the opportunity to become the next generation of engineers, scientists and computer programmers.