UW's utility plant is meant to be seen

By KATIE POPOLOW and ANTON DEKOM
The Miller Hull Partnership

Industrial-scale infrastructure is truly fascinating but rarely accessible to the public.

As central utility plants and other large-scale infrastructure projects are becoming a more integral part of the campuses and communities they serve, there is an opportunity — and we believe a responsibility — to make these facilities a much more visible, active and engaging part of the urban fabric.

We call this process of architecturally celebrating once-hidden infrastructure “making the invisible visible,” and the recently completed West Campus Utility Plant at the University of Washington is an example of how a multidisciplinary team can not only meet the technical requirements of an infrastructure project but also advance design and sustainability to create a welcoming and engaging architectural beacon.

Prior to the construction of the new utility plant, the UW’s existing, century-old Central Utility Plant had reached full capacity and was unable to expand. 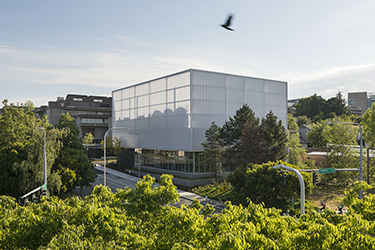 South Campus and West Campus were both growing rapidly, and the new 2018 UW Campus Master Plan proposed over 4 million square feet of new development in those areas. The new plant needed to enable the UW to support this targeted growth for the next 100 years.

One innovation the team implemented involved locating emergency power generators on the roof of the building rather than at the ground level, effectively freeing up valuable space inside for additional chilled-water equipment. This design decision allowed the team to provide 4,500 tons of initial chilled-water capacity and space for 10,500 tons of total chilled-water capacity, far exceeding requirements of the UW’s request for proposals. Those capacities translate to about 1.8 million square feet of new development now and 4.2 million square feet in the future.

The design of the plant balances sensitivity to the adjacent campus fabric with a desire to mark an entry to the UW with a singular and celebrated moment.

When approaching campus from the southwest, the building prominently signals a transition from the woodland character of the nearby Burke-Gilman Trail to the more architectural character of central campus academic buildings. The plant’s most prominent feature, its 47-foot-tall polycarbonate screen wall, draws attention to itself while acting as a backdrop to changing natural foliage and the surrounding buildings, with their material palette of brick and stone.

The screen wall’s primary function is to shroud the rooftop equipment acoustically, reducing low-frequency noise generated by cooling tower fans. However, the translucent nature of the polycarbonate still allows the industrial infrastructure behind to manifest itself on the exterior of the building in the form of a playful and ever-changing dance of shadows.

At night, the screen is illuminated by a series of LED fixtures, continuing the dynamic interplay of light and shadow that is the screen wall’s hallmark during the daytime. This design element became known as the “magnet,” attracting regional curiosity and drawing visitors to the building to witness a spectacle of modern infrastructure. 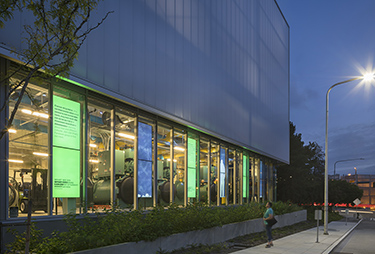 The interpretive component of the project consists of two primary elements: the polycarbonate screen wall, which draws people to the plant, and a series of LCD screens at the pedestrian level that display curated content related to the university’s commitment to sustainability.

This content was developed based on the belief that facts inform, but powerful stories resonate. Taking advantage of the collective wisdom within the UW community, the project team engaged students and faculty in the UW’s visual communication design program to create the initial interpretive content.

The students’ design features animated figures and human silhouettes that move from one screen to the next, catching the attention of passersby. The six bands of monitors progress through a 10-minute content cycle that raises awareness of sustainable programs on campus as well as information on how to get involved. The monitors are reprogrammable, allowing the university to continue to curate their unique approach to sustainability.

The progressive design-build delivery method was selected based on the belief that it would offer greater opportunity for UW involvement throughout the project, resulting in a facility superior to what could be achieved by traditional delivery methods.

Progressive design-build allowed a large and diverse group UW stakeholders to participate with the design-build team throughout the project. Engineering needs and solutions, driven by years of campus-systems experience from the facilities representatives, were balanced with the architectural and planning goals of the university architect. Budget and scope were continually monitored by the Capital Projects Office.

This was the UW’s first time using progressive design-build on a new building, and it is now their preferred delivery method for major capital projects.

The LEED green-building rating system only applies to occupied buildings, and therefore was not applicable to this project. However, the purpose of Envision is similar to that of LEED: to foster a necessary and dramatic improvement in the performance and resiliency of physical infrastructure across the full economic, social and environmental dimensions of sustainability.

The West Campus Utility Plant’s success has been recognized for design and delivery excellence, recently receiving honor awards from the American Institute of Architects Washington Council and AIA Seattle, and a Design-Build Institute of America national award of merit.

Katie Popolow is a principal at The Miller Hull Partnership with over 27 years of architectural experience on a wide variety of project types. Anton Dekom, a project architect at Miller Hull, has coordinated with a host of consultants and contractors on numerous sustainable infrastructure projects.