The last remaining undeveloped warehouse on the University of Washington’s Tacoma campus has found a new purpose: providing classroom, studio and lab space for programs in urban studies, engineering and biomedical sciences.

The four-story, 40,000-square-foot Tacoma Paper & Stationery building was built in 1904. It has been home to biscuits and candy, paper and stationery, and an Old Spaghetti Factory.

Now it’s home biotechnology labs and urban design studios. Its latest transformation connects past to present, and brings new life and purpose to a structure with more to give.

The building represents UWT as an urban campus inextricably linked to local institutions and community. It creates an active, meaningful and vibrant connection through the building to campus, and allows a beautiful, historic building to be an inspiring backdrop for learning and community engagement. 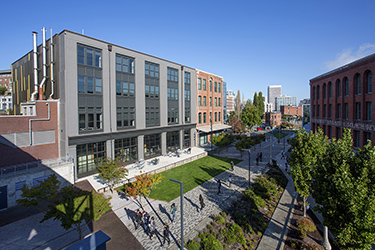 Photos by Cavenphoto LTD [enlarge]
The building has large overhead doors that open to the Prairie Line pedestrian trail.

Ambitious adaptive reuse projects such as this one require a collaborative team to work their way through unforeseen conditions and creatively obtain the vision of the new program and purpose. A key relationship within the team was between the structural lead, PCS Structural Solutions, and the designer, The Miller Hull Partnership, who worked together to achieve design intent despite the building’s structural challenges.

To achieve a dynamic, transparent space, we needed to strategically locate large openings in the existing floor and exterior walls. By creating a large opening in the first level (on Jefferson Street) and a communicating stair to the ground level (on Prairie Line Trail), it became possible to visually connect both entrances and increase interaction and connection of programs within the building.

The first-level space meets student and faculty needs for the newly developed urban design program. Classrooms, studios and meeting rooms on this level are a catalyst for open and engaged citizenry, and reinforce the core of the UWT mission as an urban-serving institution.

The ground level embraces the history of the building with its direct connection to the pedestrian Prairie Line Trail. The trail marks the historic Northern Pacific Railway mainline, which held a significant role for the building. Food and paper products were loaded off and on freight cars through large openings.

Now large overhead doors open up the building onto the trail, creating a direct indoor-outdoor connection with the building’s large, informal learning and gathering space and open maker space. This is a vibrant focal point for faculty and student interactions, and generates an inspiring and welcoming meeting place for the campus.

The windows on the upper levels of the building were already revolutionary for their time, providing large bands of natural light to the factory areas on those levels.

Most heritage buildings on campus or in the city of Tacoma have punched window openings. However, this unique construction system has the windows grouped into vertical bays between the masonry piers.

With great respect for this original expression, Miller Hull and PCS developed a system of fire-resistant wood construction to support giant Milgard fiberglass windows, bringing an enormous amount of light to the labs and classrooms.

Solid interior partitions are oriented east-west while interior walls in the north-south direction are glazed to maintain views across the deep floor plate and allow for the infiltration of light into the building.

To support the introduction of classroom occupancies and biomedical labs, the building needed to be reinforced with a redundant steel structure and new concrete, four-story shear walls. In addition, to support the proposed active learning classrooms, massive wood columns were removed at two levels to create an open, flexible environment. 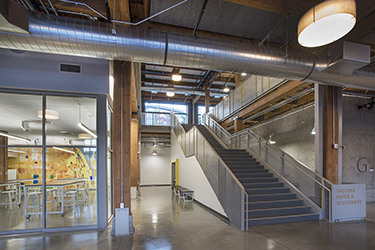 With careful analysis, the micropile design did not penetrate the confining layer between the shallow and deep aquifers. The project was able to remove and replace damaged portions of the existing concrete slab on grade without disrupting contaminated soils and triggering a full remediation of the soils.

The project’s success came from “listening” to the building.

The building was built for massive storage and weight, giving the team the ability to leverage heavier structural solutions. This allowed the opportunity to maintain, revitalize and showcase heavy timber beams, and add new structural elements of painted steel and concrete in a similar raw, earthy palette.

The concrete shear walls are kept to the edges, and blend with the brick walls maintained and reinforced with steel joints.

Unlike many of the buildings on campus, the team painted the existing interior brick to highlight the texture of the various types of masonry used. New elements like classroom partitions and gathering spaces are in tones of gray, white and bright yellow, with a layer of environmental graphics that displays the history of the building and reinforces ties with the city of Tacoma and the system of railroads that put Tacoma on the map.

The Tacoma Paper & Stationery building celebrates PCS and Miller Hull’s long history of collaboration and adaptive reuse on the UWT campus, starting in 2004.