This comes as no surprise to those of us in the industry: It has been estimated that there will be a shortage of 1.5 million craft professionals by 2021.

With the added pressure of the baby boomers retiring, one has to wonder how the jobs will be filled. Who is going to repair that leaky pipe, rebuild the roads, replace your air conditioning, hang the drywall, or fix the power line? It is easy to think that it’s someone else’s problem until we realize just how much this many vacant positions in the construction industry can affect our daily lives.

Rachel Burris talks more about this in her article at http://www.nccer.org titled, “Investing in the Future.”

A 2015 AGC survey showed 86 percent of responding firms reported having a hard time finding qualified workers and 78 percent predicted that hiring conditions would remain the same or worsen as demand increases. Left unaddressed, these shortages will ultimately undermine the industry’s recovery and impact broader economic growth through construction delays.

The shortages are the consequence of a series of policy, education, demographic and economic factors that have decimated the once robust education pipeline for training new construction workers. 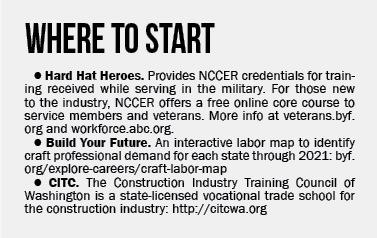 As noted in AGC’s 2017 Workforce Development Plan: “The lack of sufficient secondary-school career and technical education training programs across the country means that as the construction industry expands to meet growing demand, an increasing number of firms will have a hard time finding skilled workers. A quarter of firms have passed on projects because of worker shortages.”

Another 2015 survey found that construction workers are the happiest employees of any industry. Why? It is believed that the satisfaction found in bettering communities, the opportunity to obtain the on-the-job training needed to advance as a skilled craft worker, and the continued growth in the industry make construction a great place to build a career.

Today the construction industry employs about 7.5 million workers. Associated Builders and Contractors estimates that we need to hire a staggering 500,000 workers just to fill a backlog of existing jobs. If we add a $1 trillion infrastructure bill into the equation, we could have more than 1 million jobs waiting to be filled.

The demand for construction workers is high, and firms are looking to hire.

Construction is a career in high demand with opportunities for people from all walks of life. According to the job search site Indeed, construction careers like preconstruction manager and construction superintendent rate among the top 10 jobs for 2018 based on great salaries and the growth in job postings.

Construction professionals build schools, hospitals, hotels, stadiums and everything in between. The industry has provided fulfilling and lucrative careers to hardworking Americans for generations, and continues to play an important role in national and local economies. It is also among the few industries where someone can enter as an apprentice or trainee and be paid to further their career through earn-and-learn programs, all without accruing student loan debt. Skilled trades are a viable alternative to college for young students.

Wendy Novak is president and CEO of ABC of Western Washington.