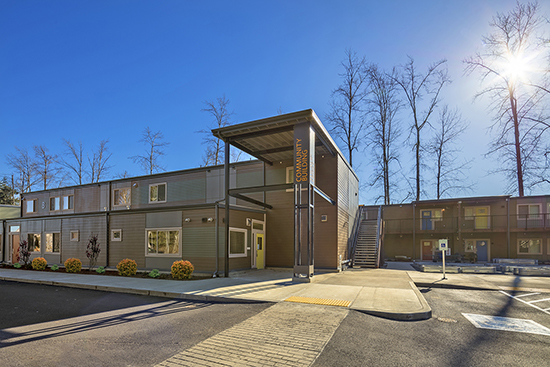 Synergy Construction was awarded the Pyramid Award — second best overall — for its work on the Twin Lakes Landing housing facility in Marysville. This 50-unit housing complex is home to low-income families, many of which were previously homeless.

The scope of this project involved prefabricated and multifamily construction that spanned over 11 months and covered 47,000 square feet.

Synergy pioneered a full modular delivery method that dramatically decreased on-site risks and the time it takes to construct and deliver affordable housing. It accomplished this by building the modular units in a temperature-controlled facility in Boise, Idaho.

Once units were completed with drywall, paint, flooring and appliances, they were arranged on a storage lot in the order they were to be placed on-site. The units were then moved to the Twin Lakes site in 54 trailers and placed on their foundations with a 500-ton mobile crane.

Completion of this project was not without hurdles. Not only did Synergy have to deal with one of the wettest winters on record, it also discovered that the water table on site was only 3 feet below the surface. This required installation of de-watering wells along the entire length of the site and underground infiltration beds to serve as the stormwater system.

Synergy was then able to de-water, trench, install sewer and water extension lines, and place the foundations while the modular units were finished off-site.

Synergy finished the project without an incident. Of the 12,804 labor-hours recorded, there were zero OSHA-recordable cases of injury that required days away from work, nor were there any instances that required job transfer or restriction.