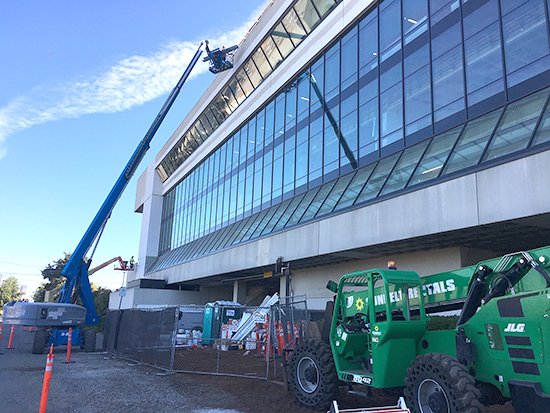 Photo from ABC of Western Washington
Due to poor conditions with the existing substrate, up to three coats of paint were added in some areas to even out sheen differences.

SKIS Painting worked on the exterior of the Georgetown Squared building in Seattle.

This specialty construction project covered 280,000 square feet and took about four months to complete. The original scope involved pressure washing all exterior surfaces, and prepping and painting all existing painted surfaces except for the loading dock area. However, as the project progressed, the scope grew to include repainting the attached skybridge, as well as a complete assessment and subsequent refurbishment of expansion joints.

In addition to coordinating safe access to the building around pedestrian and vehicle traffic, SKIS faced inclement weather, inconsistent substrates and issues with the building envelope.

Achieving a consistent appearance and providing a watertight surface meant re-caulking all the expansion joints, even though the removal of the old caulking would damage the existing EFIS system. The added scope required SKIS to score each caulking joint to release pressure, clean the surface, bridge the gap with bond breaker tape, and then apply sealant.

Due to poor conditions with the existing substrate, up to three coats of paint were added in some areas to even out sheen differences.

Of the 1,500 hours worked on this project, there were zero OSHA-recordable cases of injury that required days away from work, nor were there any instances that required job transfer or restriction.