Measuring less than 8,500 square feet, the building footprint is relatively small compared to typical high-rise projects. The sleek design by Hewitt makes the most of its small site by cantilevering over a neighboring building to increase the floorplate starting at level 17.

One of its most difficult execution challenges is minimal site access in a busy, cramped downtown location. The team is not allowed to impede traffic on Second Avenue, limiting deliveries to only Stewart Street.

The technical and complex shoring system presented additional challenges, including underpinning the adjacent Broadacres Building to the south and installing a Dywidag bracing system to the west. 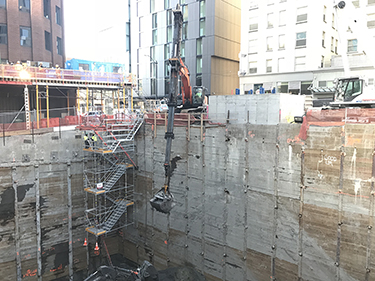 Photos from City Transfer [enlarge]
The teledipper uses a 2.5-cubic-yard bucket, moving between 650 and 750 cubic yards of material per day.

During preconstruction, Andersen Construction, City Transfer and Malcolm Drilling put their collective knowledge to work formulating an excavation plan which would maintain crew production rates and mitigate potential impacts to the overall project schedule. Due to the site’s constraints, it was determined that a traditional conveyor system would be ineffective because of the conveyor’s large footprint and frequent assembly changes during excavation and shoring.

Projects like The Emerald with small, deep footprints require removing a relatively small volume of material to provide sufficient square footage for shoring and lagging activities to continue productively. During this stage of construction, shoring became the project’s critical path driver. With this in mind, City Transfer’s team proposed using a telescoping excavator known as a teledipper.

Last year City Transfer visited a transit portal station under construction in Canada to see the teledipper in action and review its functions and feasibility. Already used extensively throughout Europe, the teledipper excelled on a similarly tight and congested work site as The Emerald. This is the first project in which Andersen Construction and City Transfer are using this unique piece of equipment. 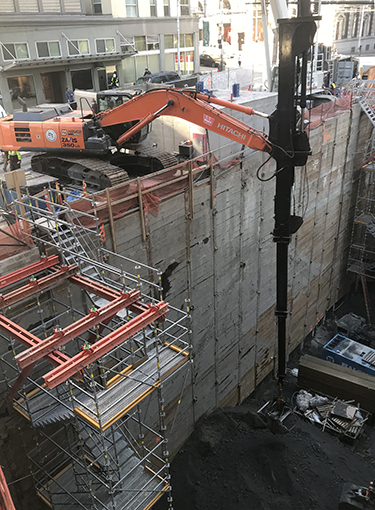 The teledipper’s boom extends to 72 feet and uses a 2.5-cubic-yard bucket, moving between 650 and 750 cubic yards of material per day. Meaning? The teledipper has significantly less space requirements than a conventional conveyor system, while affording better efficiency than a traditional long-stick excavator or crane-and-skiff method.

Though less productive than a conveyor, which can move up to twice the volume per day, the teledipper’s benefits more than compensated by saving precious space onsite and alleviating field congestion amongst excavators, drilling rigs, a mobile crane, and compressors.

The teledipper also offered additional laydown area at street level by removing the conveyor’s control shack. This space proved invaluable to other trades for material deliveries and hauling, thus boosting efficiency to the overall project workflow.

In downtown developments where space is at a premium, especially in Seattle’s current construction frenzy, dense high-rise developments frequently replace mid- and low-rise buildings. Towers with the combination of confined space and deep excavations can benefit from the teledipper’s capabilities.

Oftentimes, developers must acquire easements from neighboring property owners to install shoring elements (i.e. soil nails and tiebacks). When these easements are unobtainable, alternative retainment methods such as internal braces and/or rakers are often used throughout the excavation phase. These elements, like a conveyor, can be cumbersome to field crews and limit logistical and operational productivity. With the right conditions, the teledipper can help maintain schedule while operating within a braced excavation.

The Emerald is anticipating completion in May 2020. When finished, the 381,571-square-foot tower will house ground floor retail in addition to high-end condos and a wide array of amenities and unobstructed views of the sound to the west and downtown to the south. The 39th floor will be home to an outdoor barbecue and terrace, kitchens and common rooms for residents.

Sam Bernoski is a project manager for Andersen Construction who joined The Emerald team in October 2017.