The recent swarm of earthquakes in Ridgecrest, California, should remind the Pacific Northwest that it’s not a matter of if, but a matter of when.

Off the coast of Washington and Oregon lies the Cascadia subduction zone, a 700-mile-long fault that has the potential to release magnitude 9.0 earthquakes and devastating tsunamis.

More than 100,000 people live in these areas and communities like Westport have as little as 20 to 30 minutes of evacuation time from a Cascadia-generated tsunami.

With its low-lying geography and little available high ground, this does not provide sufficient time for residents to evacuate.

The Ocosta School District has long recognized they are in the tsunami inundation zone and their previous evacuation plans were to shelter on the second floor of the 1980s high school.

Although the high school was not designed to resist tsunamis, this was the best available option until 2014 when residents overwhelmingly approved funding for a replacement elementary school to include the nation’s first tsunami vertical evacuation structure.

The new Ocosta Elementary School represents a multidisciplinary approach to public safety and the engineers and designers involved overcame several unique challenges to deliver the project.

The first challenge was to define the potential tsunami hazard as, at the time, it was not quantified in the building code in the same way that wind loads and seismic forces are codified.

This was accomplished through site-specific inundation modeling to define depth and flow velocity of the incoming water. The modeling combined with design guidelines resulted in a safe refuge which is 55 feet above sea level and 28 feet above grade.

Hart Crowser identified the presence of two liquefiable soil layers, meaning the school’s foundation would have to resist earthquake-induced liquefaction prior to experiencing forces and scouring effects of tsunami inundation. Auger-cast concrete piles were selected for the foundation system and a performance-based design approach was utilized to ensure the piles could resist these cumulative effects.

Progressive collapse analysis techniques were used to validate that failure of a single structural element would not result in disproportionate collapse. The new school replaces a 1960s structure with a 37,000-square-foot building includes an activity wing which houses the gymnasium, cafeteria and music classroom.

The roof of the activity wing was designed for assembly live loads and has four external stair towers to access the roof. With an area of approximately 8,500 square feet, the safe refuge has sufficient room for the entire K-12 student body along with faculty, district staff and local community members.

The safe refuge provides 24/7 emergency access for the public and can easily accommodate 1,000 people. 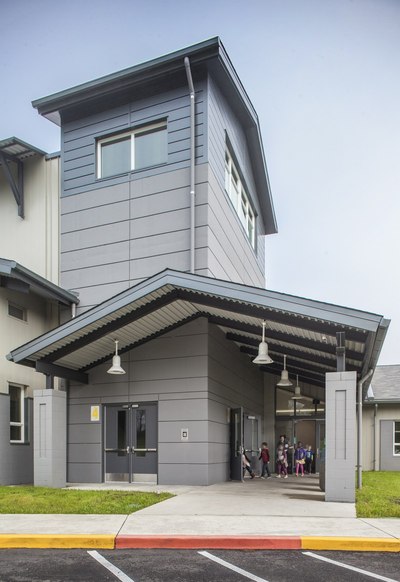 [enlarge]
Students enter the stair tower as they participate in a vertical evacuation drill.

Since the primary role of the building is to serve as an elementary school, TCF Architecture designed several security measures to ensure that the safe refuge can be accessed by the public in a non-tsunami emergency while the students remain safe during normal school operations.

All of the entry doors for the safe refuge are located on the exterior of the building. These doors are secured with magnetic-release locks which can be overridden in the front office if an earthquake occurs or a tsunami warning is issued. If the event happens after hours, the public can access the roof by breaking an access panel adjacent to the entry doors.

Security cameras deter unlawful access except in an emergency. The pioneering aspect of this project is leading many neighboring jurisdictions and other organization to take notice.

Several are taking deliberate steps towards developing vertical evacuation refuges in their communities. Although grant funding was not awarded to this project, the Federal Emergency Management Agency did deem the application eligible which allows future tsunami-safety projects an opportunity to apply for federal grant funding, such as recently awarded tsunami vertical evacuation structure projects for the Shoalwater Bay Indian Tribe, city of Ocean Shores and Aberdeen School District.

Finally, the project served as a proof of concept in that it was completed even before mandated by the building code, thus demonstrating that communities can take proactive steps to increase their safety even when confronted with a seemingly overwhelming hazard.

The Ocosta Elementary School received the Outstanding Award for New Buildings Less than $20 million from the National Council of Structural Engineers Associations in 2018.

Cale Ash is a principal and the director of Degenkolb Engineers’ Seattle office.