When it comes to renovations, seeing is believing

The average public school building is more than 40 years old, and most of these buildings have not been significantly improved in more than a decade.

Public school districts are faced with the need to replace, or extensively renovate and upgrade their schools. Since the burden of public school capital improvements falls primarily on local communities, voter satisfaction is a critical component in the ability to continue to pass bonds to improve our schools.

Those involved in K-12 work know the key to a successful school renovation is to meet the bond intent and open for the first day of school. However, the community’s perception of this success is often dampened when these improvements are nearly invisible.

Millions of dollars are spent on deferred maintenance, seismic, security and technology upgrades. We know these are vital elements to keeping our aging schools safe and relevant for the future, but often this work is nearly invisible.

Major infrastructure upgrades, then patch and match the finishes — a thorough cleaning and fresh paint is almost all that is evident. Although we know this work is vital to making our buildings last, our local community members are sometimes perplexed about where all the money went when they walk through the newly reopened school.

It is essential for us to look at a school renovation holistically, even when the scope primarily consists of repairs and infrastructure upgrades. Equal to the value of assessing the structure and systems is understanding the values and visions of the staff and community that inhabit the school. Without looking at the big picture and perspectives, many of the best solutions could be missed. 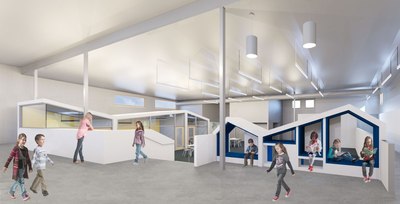 [enlarge]
A seismic upgrade provided a chance to redesign the library to improve flow and open up the space.

In 2017, the Lake Oswego School District in Oregon passed a bond to replace, renovate and upgrade their schools.

They identified three elementary schools to keep and upgrade for long-term use, one of which is Westridge Elementary School.

Nestled in the trees above the lake, this single-story school for approximately 450 students built in 1980 had received maintenance and repairs, but no significant investments. The building was slated for a full roof replacement, new windows, mechanical and plumbing overhauls, technology and security upgrades, as well as district-elected full seismic upgrades and a new makerspace.

When our firm assessed the building, we also met with the staff and community to help us understand their unique viewpoints and frustrations regarding the school.

The main entry canopy at Westridge had a wood frame which was found to have significant rot requiring extensive replacement. At the same time, it was noted that there was no sense of arrival to the school. The entry canopy was low and blocked natural light, making the approach feel like entering a tunnel.

FFA reviewed the cost of repairing the canopy with the owner’s team, along with the alternative that they could use those same funds toward a new canopy which would provide a new welcoming identity for the school.

Together, we looked at concepts and the district agreed that it was more valuable to invest in the option that improved the presence of the school than to expend substantial resources to fix a canopy that created a dismal approach to the school.

Another opportunity was discovered at the library. Centrally located, both physically and fundamentally, the library was to receive seismic upgrades, but it had other space-planning issues.

The library was chopped up with partial walls, a stairway and a loft. These partial walls divided the library from the hallways that encircled it and blocked the light from the perimeter clerestory windows.

A former reading loft occupied one side of the library. The loft was not usable for students and was being used as a work area for the teaching assistants and for storage. The seismic assessment further determined that partial-height walls and the loft would require significant work for the seismic improvements. The loft would need to nearly be rebuilt, each wall stripped, plywood added, and new footings would have to be cut into the slab and poured underneath. This meant costly work for a space that was not fully accessible.

Our team saw that these challenges could also be opportunities for significant improvements to the learning environment. Knowing that the staff and community felt that the library was the heart of the school, our team saw an opportunity to make the architecture match their values. Instead of investing in seismically bracing the partial walls, chopped up rooms and loft, we proposed to remove them.

Removing the loft and walls made the library feel bigger and allowed natural light from the clerestory into the space. Flexible meeting rooms and work areas were provided at one edge to accommodate various uses. The library was made safer, more functional and the clutter had been removed to reveal the heart of their school. 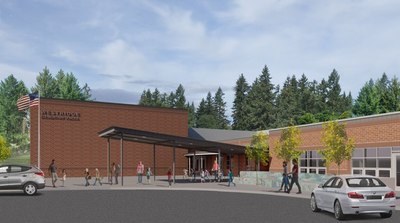 Understanding the values and visions of the community and the school district for Westridge school was vital to FFA’s design of their renovation. It provided a framework to analyze the needed maintenance and infrastructure upgrade work and find where we could add value to the school. Identifying these opportunities for the district allowed us to help them to consider how they could more effectively use their funds.

When the doors open at Westridge Elementary School this fall, the students and community will be able to appreciate how their bond-funded improvements have made significant impacts to the experience and learning environment of their school.

Laura Roark is an associate at FFA Architecture and Interiors and leader of their K-12 educational team. She has worked in educational architecture for nearly 20 years and is currently the project manager leading the Westridge Elementary School renovations.