A designer’s day as a kindergartner

Recognizing the growing needs for early learners, the district decided on the idea of a kindergarten center in tandem with the passage of new Washington state laws for all-day kindergarten.

In 2013, Mukilteo School District hired DLR Group to design a new, 600-student kindergarten center called Pathfinder Kindergarten Center. As an architect I was excited and, honestly, a little terrified.

In lieu of adding additional classrooms to each elementary school in the district, Mukilteo School District opted for a central, kindergarten-only school as the most efficient solution to their capacity challenges.

Naturally, the idea of a kindergarten-only school presented a unique opportunity to design a facility for a single age group.

What does a school look like if it is designed specifically for them? We knew that a successful facility for these learners required us to forget what we thought we knew about traditional elementary school design. We needed to fundamentally challenge everything.

We began a process that attempted to reshape existing paradigms.

In order to do this, the design team went through several empathetic exercises with the client. We asked people to genuinely connect with the specific needs of a kindergarten student. For instance, in our initial workshop together, everyone was asked to share pictures of themselves as a kindergartner and to introduce themselves as they were then.

We also completed day-in-the-life exercises that asked participants to imagine a young learner of the future, considering their family, their unique needs and learning styles. Immediately following, the teams introduced and shared details about their students. It was at that time we got our first glimpse of our future students. 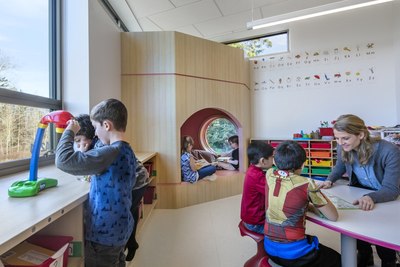 Using DLR Group’s intranet platform, I surveyed our entire firm of approximately 1,200 people to share their first memories of kindergarten. The design team then categorized their responses. A high percentage of responses reflected on play and creativity, but surprisingly, equally as many were related to fear, anxiety and rules.

Personally, I hadn’t thought about kindergarten that way, as much of my personal recollection centered around play. By asking this simple question, the team began to really consider how we could alleviate some of this childhood anxiety.

To expand upon those reflections of childhood, I decided that it had been way too long since I had been in kindergarten. As a result, the director of facilities for Mukilteo School District and I sat through two half-day sessions of kindergarten to see what else would strike us about the daily activities of these unique learners.

First and foremost, we recognized that although necessary, transitions take valuable time away from learning. As you can imagine, moving a large group of kindergarten students can be both difficult and time consuming. In particular, shuttling students to work with specialists consumes a large amount of time during the school day.

I watched as students were gathered from a variety of classes, dressed in outer gear for the trek, and were guided to a small portable classroom across the campus where multiple specialists worked with small groups. The space was poorly designed, too noisy and too small for effective intervention. After the sessions, students re-dressed in their outer gear and traveled single file back to their respective classrooms.

Knowing that this specific group of students could gain the most from uninterrupted learning time, I asked myself, how does this situation help students? I knew immediately that design could mitigate this scenario. 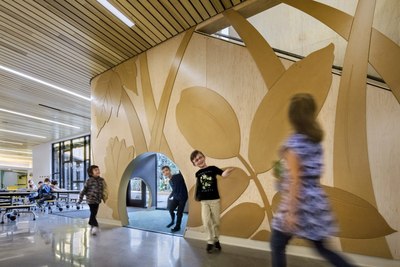 Photos by Chris J. Roberts Photography [enlarge]
Each classroom has a cozy, child-size nook and is furnished with play-and-learn stations for small groups of three to four students, or alone time. 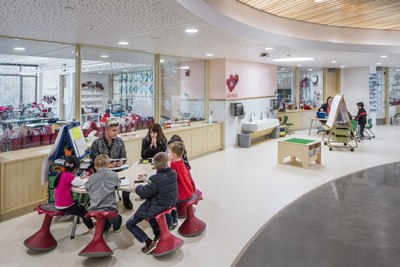 Photos by Chris J. Roberts Photography [enlarge]
In its pre-design process, DLR Group surveyed the entire firm to share their first memories of kindergarten, to create a more children-friendly result.

A school of 600 5-year-olds could be frightening for children away from their moms, dads and siblings for the first time.

DLR Group’s design addresses this challenge by diverting the students into four pods — two upstairs and two at ground level. Pods consist of six classrooms, allowing 25-student classes. Each classroom has a cozy, child-size nook and is abundantly furnished with play-and-learn stations for small groups of three to four students, or alone time.

To reduce transition time, the design team introduced two concepts: push-in specialists and decentralization of services. Larger programs, like dining and specialist areas, are broken down into smaller breakout spaces and dispersed throughout pods. Teachers and specialists push into classrooms, allowing students to stay in their respective classrooms and utilize the breakout spaces throughout their pods. In addition, by distributing dining spaces within pods, eating is a more intimate activity that is also easily supervised.

A year after occupation, DLR Group and a third-party researcher conducted a post-occupancy study to identify the design effectiveness in reducing timely transitions in a typical school day between activities and spaces. The goal was to test the idea of a modern-day 21st-century kindergarten school and how to improve its efficiency for future use.

This user research included three elements: interviews to empathize with users — hearing what they think and say; behavioral observations to study the users’ actions and why they do what they do; and photographic traces to identify how the spaces are being used.

The findings of this study support the design hypothesis that transitions can be decreased through this model to provide more time in the learning environment.

Next, through a comparative analysis with a more traditional elementary school, initial findings are indicating that the model used reduces transition time by more than 60%. This translates to more than seven school days (45 hours) of learning time recaptured.

It is clear that by simply reducing transition time, we can make a meaningful impact on young learners.

Reflecting on how this project has affected my view of educational design and its unique design, shaped by the synergy of age-specific students, brings me pride. We must remember not to overlook the smallest of users, as they have the most to gain from an unconventional planning process that focuses solely on them and their needs.

Todd Ferking is a principal at DLR Group.