In 1986, when school districts across the country were razing historic schools in favor of building new ones, the citizens of Seattle held hands and surrounded Franklin High School declaring that their school would not be torn down.

Seattle Public Schools listened and Bassetti Architects was brought on board to restore the landmark. Franklin High School’s rehabilitation became a national standard, inspiring districts throughout the country to carefully consider the preservation of their historic schools.

The project received numerous design and preservation awards, protected a community asset and revitalized the school’s educational program within the historic shell.

What no one knew in 1986, however, is that by choosing to modernize the school, the project was also supporting the planet above and beyond the sustainable features that were incorporated into Franklin’s redesign.

Since that time, Seattle Public Schools has revitalized more than two dozen historic schools and, although it has become increasingly apparent that these schools are more than capable of meeting the vast programmatic necessities associated with 21st-century learning, what about sustainability?

In the throes of climate change, can historic schools even begin to measure up to the green features being incorporated into new buildings? 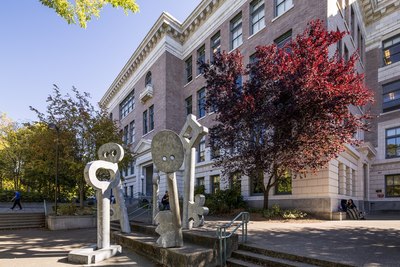 In 2011, the National Trust for Historic Preservation conducted a study on the embodied energy of existing versus new buildings called “The Greenest Building: Quantifying the Environmental Value of Building Reuse.” This document revealed that K-12 replacement projects can take up to 75 years to reach the carbon equivalency of an existing historic building.

After decades of research, there is now enough data to conduct a more conclusive life-cycle assessment of historic K-12 schools to inform the direction of our projects. This was the case with the current modernization of Benson Polytechnic High School in Portland.

After nearly 40 years since a major capital bond measure had been approved and, facing a growing backlog of deferred maintenance and inadequate facilities, Portland Public Schools set about creating a long-range plan in 2012.

With more than 40 landmarked or potentially landmarked schools built before 1950, this plan set priorities for the design teams who would work on these historic schools:

Portland Public Schools also wanted to evaluate the life-cycle embodied energy impacts of rehabilitating their schools instead of replacing them.

With this imperative, Bassetti used a life-cycle assessment to evaluate the embodied energy impacts of the design for Benson. Coupled with the program requirements and first-cost analysis, the life-cycle assessment helped the design team determine the efficacy of restoring areas of the historic building. To do this, Bassetti used methodology recommended by the University of Washington’s Carbon Leadership Forum.

For the study, we looked at four scenarios. In each one, we assumed a building lifespan of 75 years, consistent with the National Trust’s study: