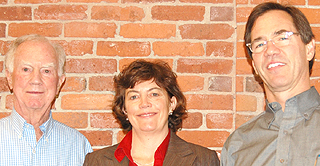 Photo by Katie Zemtseff [enlarge]
Chairman Jim Crutcher, left, marketing director Carey Crutcher Smith, and President Bill Lewis are all related to the founders of Lease Crutcher Lewis, but they say every employee is family.

In 125 years, Lease Crutcher Lewis has been through tough times before. During downturns, President Bill Lewis said the company focuses on core values and invests in employees, rather than getting distracted by the industry's panic.

Lewis said he's excited to celebrate 125 years and four generations of business but the real value is the strong foundation it sets for the future. “What's really important is what's happening now,” he said. “We're not spending a lot of time dwelling in the past here.”

In 1986, Bill Lewis established his own general contracting business, W. Lease Lewis Co. In 1989, it joined with Lease Crutcher after a number of joint-venture projects. The merger expanded the company's name, and its work into tenant improvements and seismic renovations.

In 1993, the company opened an office in Portland. That office does a lot of work in higher education, such as the under-construction $45 million Lewis Integrative Science Building at the University of Oregon.

Based on its history of surviving downturns like the Great Depression, Lewis doesn't see today's market permanently changing work.

“People have short memories,” he said. “This one is a little bigger than the last. It's certainly a reminder of ... the importance of core values and culture and commitment to improvement.”

Large commercial work has slowed and there have been some layoffs at the company. Projected revenue for 2011 is $300 million, better than last year's $210 million but off the $534 million posted during the peak year of 2007.

There are now 238 employees and the company is hiring selectively.

The Oregon operations have been growing and special projects, like tenant improvements and renovations, is steady at $100 million in revenue last year. One special project was the historic Joshua Green Building in Seattle, which was recently restored, seismically upgraded and modernized. 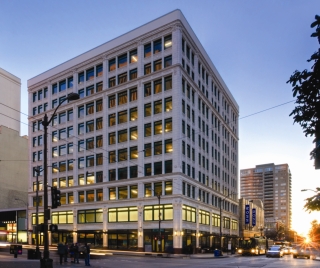 Photo courtesy of Lease Crutcher Lewis [enlarge]
About $100 million of the firm’s 2010 revenues came from special projects, such as the renovation of the Joshua Green Building. Lewis replicated historic features like the terra-cotta exterior and wood windows.

Lewis said it has been tempting to chase stimulus-funded infrastructure work, not normally an area the company works in. Instead, Lease Crutcher Lewis stuck with work it knows. Lewis listed the company's strengths as: difficult projects, LEAN and BIM, pre-construction and sustainability. He said those who don't use LEAN will be left behind.

Sustainability has become so important that LEED-certified projects made up more than half of the firm's revenues last year.

Lewis said the company's common theme is clients with demanding and complex projects, rather than a single building specialty. These include office buildings with short schedules, significant retail projects like Pacific Place, biotech work with tough demands, historic work requiring technical expertise and GC/CM projects like the University of Washington Law School.

Lease Crutcher Lewis spent the last 16 years working on the Starbucks headquarters and the last 11 years doing tenant improvements at the Fred Hutchinson Cancer Research Center. It has done many industrial and office projects for The Boeing Co., is building four buildings for Amazon's South Lake Union headquarters and is doing pre-construction work on the UW Bothell campus.

Historically, Jim Crutcher said the most important thing has always been finding good people and allowing them to lead. When he first started working, Howard Lease knew all employees, once commenting to a manager who feared losing his job over a pricey bid error that “it was just a more expensive education than I had planned for.”

Though current company leadership is related, Lewis said every employee is family. That effort is supported by an employee stock ownership plan that was launched in 2008.

Lewis said the business is entrepreneurial and less structured, allowing people to work their way up. It tries to give employees positions of leadership, tools and support as early as possible.

As part of its culture, Lewis said the business embraces reasonable risk, often taking on more than others in the industry. “We have a culture where we oftentimes seek riskier propositions then others and embrace those, as opposed to shy away from those.”

For example, it committed to a faster schedule in completing the concrete core on Touchstone's West 8th project. Instead of assembling the core on site, it brought in representatives from a German core panel business, assembled panels off site, and found and fixed about 200 problems. The structure was taken apart, loaded onto trucks, and set in place between 10 and 300 feet in the air.

If there had been a problem, Lewis said it would have been a disaster. “You wouldn't do that unless you had total confidence, so now we're the poster child for that forming system.”

In Pioneer Square, the company worked on Starbucks' 505 First Avenue building, where the subsurface excavation was aggressive but successful. Lewis said the project was done economically and quickly with some risk, compared to the safe, slow, expensive route.

Crutcher said the firm has always taken risks and was the first to use tower cranes in Alaska. It integrated computers into design and construction projects in the 1980s and was an early adopter of LEAN techniques.

Safety is another thing that keeps customers like Boeing coming back. “If you work for Boeing, the airplane is king and when you're working around airplanes and fuel and people and heavy equipment, it's always important to be safe but it's underlined in that environment,” Lewis said.

Lease Crutcher Lewis does safety plans for each project, along with other documentation, helping it achieve a no lost-time accident record last year in Washington and Oregon. It also is heavily involved with the AGC and other leadership organizations.

Crutcher and Lewis are optimistic about the industry.

“We're all waiting for the economy to turn around as everyone else in the business is,” Crutcher said. “I think Seattle has an exceedingly bright future.”