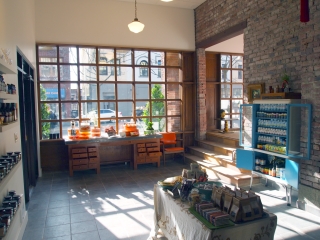 Photo courtesy of Hunters Capital [enlarge]
One of the tenants in the 900 E. Pine building is a mercantile/apothecary store called Sugarpill.

When tenants in the 900 E. Pine building announced their plans to move out 18 months ago, it opened the door to a range of possibilities.

The old building, which once housed a Pontiac dealership in the 1920s, had seen better days.

But, with the right tenant, the building would have a lot of life left in it.

Working with W.G. Clark on the construction side and SkB Architects on design, the owners set out to restore the building.

“We're very serious about trying to retain the historic structure of buildings, on the inside and outside,” said Michael Oaksmith, vice president of real estate development for Hunters Capital. Oaksmith said Hunters Capital CEO Michael Malone is adamant about saving historic buildings.

“From a construction standpoint the goal was to highlight the original architectural details that they built in the 1920s, but basically give the exterior a full service overhaul,” said Oaksmith.

SkB Architects, working with Shed Architecture & Design, used historic photos to determine how the building's mostly terra-cotta exterior, with about 30 percent stucco, should be restored.

But even before design and construction could begin, Hunters Capital needed to sell the idea to the right tenants. It used the recently restored 31,000-square-foot Ford Building, which Hunters also owns, to show the potential of 900 E. Pine. Hunters had recently renovated the Ford Building to accommodate Elliott Bay Book Co. — a redesign that highlighted the beams and flooring.

“The Ford Building was an example of what the 900 building could be, when talking about interiors,” said Oaksmith.

The office tenants who would occupy the second floor of 900 E. Pine liked what they saw in the Ford Building and signed up, according to Oaksmith. The tenants — industrial design company Pensar Development and web firm Substantial Inc. — were looking for high-end office space that also had the Capitol Hill artist loft feel.

The loft feel provides a creative environment that firms like Pensar can thrive in, Oaksmith said. “It's a culture that strives to have more than just 8-foot office ceilings. They want to be able to express themselves creatively.”

Oaksmith said the Capitol Hill loft style has been part of a shift in some tenants' tastes.

“What I've seen in the market from the 1980s to now is a definite shift (away from) the use of drywall and dropped ceilings,” he said. “Now, everyone wants high ceilings, exposed mechanical and electrical systems, just to show off the bones of the building. For buildings situated in Capitol Hill, there's an opportunity to redevelop and revitalize and get energy back into them with these high-tech type tenants.”

During the approximately $1 million renovation, construction crews found the kind of details that Oaksmith said they were expecting.

“We found beautiful, exposed wood beams and joist structures,” he said. “We completely opened everything up. New electrical and HVAC systems were installed, as well as Cat 5 systems for high-speed data.”

After stripping the old carpet from the first floor, crews found that the original terrazzo floors were in good shape. “We took a lot of time and effort to refurbish the terrazzo floors,” he said. “We knew they were there.”

The 15,000-square-foot ground floor has two main tenants: Blick Art Materials as the master tenant, and the karaoke company Rock Box, which has private rooms for karaoke.

The perfectly preserved floors, Oaksmith said, are “an example of reusing what is in a building to highlight the glory of what it once was.”

The key to making the renovation work was aligning the company's values with those of a prospective tenant. The preserved architecture “allows our tenants to express their creative side,” Oaksmith said. “It's a creativity thing that those users require.”

In addition to W.G. Clark Construction, Wilcox Construction and Dovetail worked on the project.