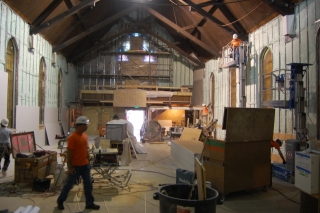 Photo courtesy of Rafn Co. [enlarge]
Walls in the sanctuary were fortified with rebar and shotcrete, then insulated.

The historic Bethany Presbyterian Church on Queen Anne is in the midst of a $2 million seismic retrofit. It is a voluntary retrofit and was not required by the city or for renovation purposes.

Rafn superintendent Gregg George said he's worked on a lot of seismic retrofits but has never done one that wasn't required by the city as part of other renovation work. “That's what's unique about this, it's just totally voluntary,” he said. “They're just concerned about the building and want it to last.”

The Gothic church is prominently set at 1818 Queen Anne Ave. N. Its sanctuary is a large gathering room with a vaulted ceiling. An 80-foot-tall bell tower is located behind it. Two wings extend along the street to the left and right of the sanctuary.

The sanctuary, bell tower and education wing have a historic landmark designation and were built in 1929.

The retrofit upgrades the sanctuary, bell tower and roof without changing the look of the exterior. Further work on the education wing will continue next summer.

The congregation of 700 became concerned about the structure's integrity after the 2001 Nisqually earthquake severely damaged other area churches. Church leaders commissioned a seismic evaluation that found the building was inadequately prepared for an earthquake. They have been planning the retrofit and fundraising ever since. 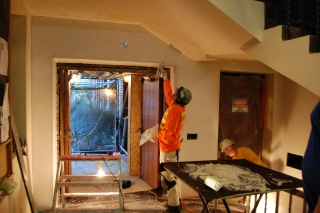 Photo courtesy of Rafn Co. [enlarge]
Crews laminated shotcrete walls inside the bell tower and are now finishing them with plaster.

Renovation began in March and should be complete by Thanksgiving.

Mike Christensen, facility administrator and church member, said the structure is worth preserving. It is the third home for the congregation, which was formed in 1888. He said the church was planned in 1927 but constructed during the Great Depression in 1929.

Continuing the project through the recent recession pays homage to that history, Christensen said.

“We want to honor their legacy and continue to (have) a building in this location,” he said. “It was clearly the right thing to do. It's basically a life-safety issue and preservation secondarily.”

The work safeguards against greater expense in the future. Christensen said repairing the structure after a big earthquake would likely be far more expensive than today's costs to upgrade it.

He said the roof would likely have collapsed in a major earthquake. The sanctuary's roof is held up by about 10 trusses, supported by unreinforced masonry walls with buttresses.

Workers carved out the inside of the buttresses, added rebar and filled the walls with shotcrete from floor to ceiling, creating a hidden interior column below each truss. Walls were placed on new footings and foundations.

The team removed interior walls throughout the sanctuary, then framed and insulated their replacements.

George, the superintendent, said there were places where the team left only the last brick on the outside. “We basically recessed an entire concrete framework within the brick wall,” he said.

Parts of the sanctuary got shear walls laminated onto brick. In an earthquake, the walls keep the building from wracking or leaning. Shear walls go seven feet into the ground.

The team is now working on plaster and drywall.

The church's pipe organ was removed and is being renovated in Oregon.

The bell tower behind the sanctuary is a five-floor structure. The team laminated shotcrete walls inside the entire tower. It stabilized decorations on the exterior of the tower, including gargoyles and finials, so they won't fall. In an earthquake, George said these types of ornaments pose an extra risk.

Adding shotcrete walls made many rooms smaller, increasing wall width by up to a foot. George said the change is more noticeable in small spaces but doesn't make a big difference in the sanctuary.

The team tore the roof down to its original decking, fortified it with heavily nailed plywood and added steel strapping into the building. Structurally insulated panels were placed on top of decking and under roofing to provide insulation.

George said there was no existing cavity to fill with insulation, so everything new was placed above the deck. Once complete, the roof will look the same from the inside.

In some cases, Christensen said the team opened walls to find missing columns. Now, he said the building will be stout for years to come.

In a commercial building, George said this type of work attracts tenants, helps insurance rates, eliminates future headaches and saves lives during an earthquake. However, seismic renovations are expensive.

George said many other fragile buildings in town could benefit from similar work.

Christensen said cost is likely the reason most churches that need to do these types of projects aren't moving forward. He said construction at Bethany has been smooth. “I think we will collectively feel like we made a good decision.”