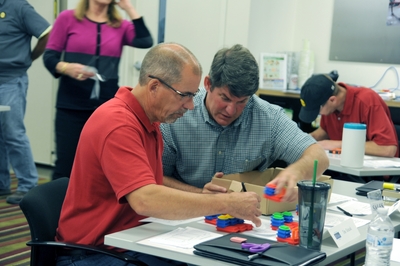 Stackable blocks aren't just for children: The Associated General Contractors of Washington is using them to teach lean-construction principles to grown-ups.

Over the summer employees from GLY Construction helped test-drive a new lean-construction class the association started teaching this week.

Employees at GLY's Bellevue office carefully assembled small, colorful Stickle Bricks — think Legos, but with interlocking bristles — to build a model manufacturing line. The blocks could be stacked in different configurations to improve (or hurt) the line's efficiency.

Lean principles, based on Toyota's ultra-efficient manufacturing methods, have gained traction in other industries such as construction and health care as a way to cut time, waste and expenses.

The hands-on exercise with the blocks was an “experiment to show you how these concepts apply,” said Jim Elliott, health-care principal at GLY.

AGC's lean-construction class was developed by popular demand, according Diane Kocer, executive director the organization's Education Foundation, which offers 20 to 30 classes a month to individuals and companies.

Interest in the class came from the general contractors, she said.

Requests for proposals, particularly for health-care projects, are asking more often whether employees are knowledgeable about lean principles, she said.

Local general contractors, including GLY, started requesting that AGC put together a full-fledged course to bring their employees up to speed, Kocer said.

Most of the state chapter's classes are based on materials developed by the AGC of America, Kocer said, but the national organization's version is still under development. So the state chapter took the unusual step of creating its own course, enlisting help from KCE, a Seattle engineering consulting firm, to develop the content and teach it.

Demand for the course is an indication that the economy is improving, Kocer said. “We wouldn't be doing this three years ago.”

AGC of America spokesman Brian Turmail said the national organization, working with the Lean Construction Institute, plans to release the fourth of seven lean-construction course modules in November. The remaining modules will be ready by the end of 2014.

The AGC of America is interested in the local program, he said, and using the best elements of it.

Tools such as building-information modeling make it much easier for contractors to embrace lean construction, Turmail said, so interest around the country is growing.

The AGC of Washington's course comprises six four-hour modules, covering topics such as problem solving, process optimization and “pull” planning. Each module can accommodate up to 18 students. The cost is $150 per module for AGC members, and $175 for nonmembers.

A long waiting list formed to get into the course, Kocer said, so it will start up again in January.

Lessons are taught so they're applicable to employees “all over the map,” Kocer said, whether they're estimators, company presidents or in the marketing department. Students work in teams and don't use a textbook.

Jim Elliott of GLY said his company's collaboration with the AGC to develop the course arose from his work on the board of AGC's Education Foundation.

GLY has been doing projects using lean construction for around five years, he said, “and every year we're doing more and more, primarily with health-care clients.”

GLY has been using lean construction to improve its clients' operations, as well as the design and construction cycle. But the company wanted to use lean principles to look inward, too.

The test-run training that took place over four sessions involved a range of employees from different departments. It focused on ways to reduce waste, reduce costs and become more effective, Elliott said.

One exercise was to look at GLY's warehouse in Woodinville, which supplies the company's job sites. The company looked at how it could improve its supply processes by eliminating steps and redundancies.

With the new processes in place, the company will track its costs to see if the processes are working, Elliott said.

GLY also wants to apply lean principles to back-of-the-house functions such as marketing and accounting.

The summer course run-through “was a great experience,” Elliott said.

The feedback GLY provided was on how to better adapt the lessons to the construction industry. The concepts are the same regardless of the industry, Elliott said, but the lesson examples and areas of focus differ.

Elliott said he thinks every construction company could benefit from learning lean principles, and wants to see more subcontractors get interested.

Contractors already use lean concepts, he said, but a formal introduction to lean construction provides contractors with a better framework for applying those concepts, and a better way to speak to owners, architects and engineers about it.