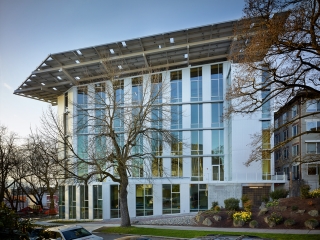 Ever since the Bullitt Foundation opened the $32.5 million Bullitt Center in early 2013, the foundation has billed its namesake project the greenest commercial building in the world, based on its super energy-efficient design and other attributes.

But now the six-story, 52,000-square-foot office building has received an honor that gives that “world's greenest” claim some serious heft: a Living Building certification.

The Bullitt Center, at 1501 E. Madison St. in Seattle, is the largest structure in the world to earn a Living Building certification, and the first commercial building. The certification was announced Wednesday.

Earning the certification meant demonstrating a full year of meeting net-zero energy and water use, starting from Jan. 1, 2014. In addition, toxic chemicals were screened from all the building materials and all the wood was certified by the Forest Stewardship Council. Toilet waste is composted and rainwater is captured for all uses, even drinking.

The International Living Future Institute administers the Living Building Challenge, which the group describes as the built environment's most rigorous and ambitious performance standard. The U.S. Green Building Council's Cascadia Chapter first launched the challenge in 2006, then established a separate nonprofit in 2009 to oversee it.

Projects in 12 countries are registered in the Living Building Challenge and six other projects have been certified, including McGilvra Place Park, which sits next to Bullitt Center.

“Quite simply, this is one of the most important buildings in the world,” said Jason McLennan, CEO of the International Living Future Institute, in a statement. “The Bullitt Center proves that dramatic improvements are possible when a talented group shoots for the stars.” 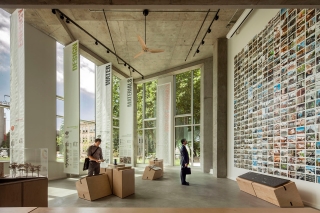 [enlarge]
Building materials were screened for toxic chemicals and all wood was FSC certified.

Point32 was the building's developer and owner's representative, and PAE was the mechanical and electrical engineer.

The center certainly looks like no other office building with its wide solar-paneled overhang, which sits atop the building like a broad-rimmed cap. A prominent glass-enclosed staircase gives tenants an appealing alternative to the elevator.

Brian Court, a partner at Miller Hull, said the Living Building certification is particularly meaningful for Bullitt Center because it's a speculative office building, not a one-off nonprofit or institutional project.

Bullitt Center is relevant to the marketplace, he said, and the certification shows this type of project — solar panels and all — can be successful, even in cloudy Seattle.

Denis Hayes, CEO of the Bullitt Foundation, said in a statement that “we made a huge, bold bet that human creativity could overcome dozens of unprecedented challenges. If Living Buildings can be built and operated in Seattle, the cloudiest major city in the contiguous 48 states, they can and should be built everywhere.”

The results speak for themselves:

• In 2014, Bullitt Center produced 60 percent more energy from solar panels on its roof than it used, largely due to efficiencies that exceed expectations. The excess energy offset 35 metric tons of carbon.

• The building used 76,900 gallons of potable water less than what it was designed to use.

• Non-potable water use, such as rainwater used to flush toilets, was 7,400 gallons less in 2014 than what it was designed to use. 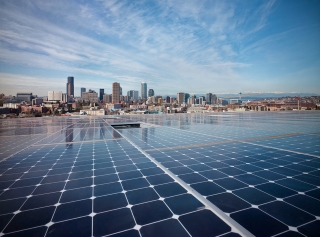 • The building captures all water that hits the site and reuses it to flush toilets. It also filters rainwater through its onsite wetlands to provide natural cleansing and avoid chemical runoff into Puget Sound.

Casey Schuchart, building division manager at Schuchart, said in a statement that there was a learning curve involved with constructing a Living Building.

“It wasn't only Schuchart's first Living Building, but our subcontractors' too. We had a team that truly rose to the occasion by developing products and techniques that didn't even exist at groundbreaking.”

Phillips told the DJC that the building needed to be fine-tuned after construction to maximize its efficiency.

“When we took over management a year ago, the building was not collecting as much water as it could have and should have,” he said.

So Unico made a number of water collection and valve changes to send more water into the building's cistern.

Adjustments were also made to the center's building-intelligence system, which tracks its energy and water use. Having real-time data on hand makes it easier for building managers and tenants to regulate their use of resources.

“Data sensors and set points can get out of hand” if they're not tended to, Phillips said, making energy- and water-use readouts less reliable.

Tenant behavior can have a big effect on building performance, so it's important for tenants to receive feedback on how well they're doing.

Phillips said tenants receive monthly reports on the building's performance, and the results can be broken out floor by floor. A surge in water use, for example, could prompt tenants to take shorter showers on the mornings they bike to work.

The building's fancy staircase has also had a big effect on energy use, because it prompts so many people to skip the elevator. Elevators typically account for 5 to 10 percent of a building's energy use, Phillips said.

Brian Court at Miller Hull said that two-thirds of the tenants are opting for the stairs at Bullitt Center, compared with 90 to 95 percent who opt for the elevator in a typical office building.

People like that they can dress for the season, he said. Since heating comes up through the floors, some tenants prefer to go barefoot.

If there were any surprises with the building's performance, it was that it's performed beyond expectations, even accounting for the fact it's not fully occupied.

“We were pretty aggressive with goal setting,” he said. “The building has been performing at an EUI of 10, way below what we thought was an unprecedented target,” originally set at 16.

Court said there isn't much he'd do differently if he had another chance at designing the building.

“All the big moves we feel great about,” he said.

OK, there was one thing.

“We were so focused on meeting goals that perhaps we could have been a little looser about the placement of the windows to take advantage of the views, more just for the delight of the occupants.”