As waterparks multiply, so do injuries and drownings 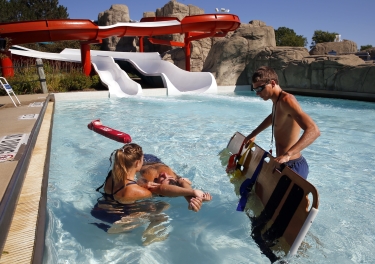 YPSILANTI TOWNSHIP, Mich. — With their appealing slides and wave pools, splashing around at waterparks is an increasingly popular way to spend a summer day. But the shallow waters belie hazards that experts say visitors who are focused on the fun may be underestimating.

As the parks proliferate, concern is growing about the risks present even when most of the water is shallower than 3 feet — people who aren't good swimmers mixed with the unexpected hit of waves and falls that can lead to concussions or even drownings. The American Red Cross, a leading trainer of lifeguards, has taken note and added training for extreme shallow water rescues.

“We pretty much have an ambulance call every weekend,” said Brian Machemer, superintendent of the Rolling Hills Water Park in Ypsilanti Township. He added, “On average, we probably have a pull-out a day. Now, that isn't always a serious incident. But it's somebody who's struggling that we feel we need to help out.”

While no figures are available for overall waterpark injuries, the Red Cross cited U.S. Consumer Product Safety Commission estimates when it launched its updated training efforts this year. Those show about 4,200 people a year taken to emergency rooms to be treated for scrapes, concussions, broken limbs, spinal injuries and other such injuries suffered on public waterslides. Those numbers, though, do not include other waterpark injuries or those who need lifeguard assistance without a hospital trip.

“You're in an environment that is extremely fun but can be extremely dangerous if you're not vigilant,” said Roy Fielding, a senior lecturer at the University of North Carolina-Charlotte and a specialist in lifeguarding and water safety who is on the Red Cross Scientific Advisory Council.

In July alone, one drowning and at least three near-drownings were reported at U.S. waterparks. A 5-year-old girl drowned in a shallow area of a wave pool at a municipal-owned waterpark in Grand Island, Nebraska. The wave pool was not operating at the time.

Two of the near-drownings involved children in Missouri and California at municipal-run waterparks — a growing segment of the industry as cities and counties look to boost revenue from what their flat-water pools deliver. The other was at a corporate-owned waterpark in Utah. The Missouri incident involved a 6-year-old girl who hit her head on the bottom of a kiddie pool. The other two occurred in wave pools, which are shallow at the entrance but usually slope to at least 5 feet deep.

“One of the things that can happen is in our wave pool people aren't used to being hit by waves of water,” Machemer said. “Things like water getting in their mouth. Them swallowing that water can happen. They can set off a panic reaction.”

About 1,300 waterparks are operating in North America, up about 30 percent from a decade ago, according to the trade group World Waterpark Association. Those parks attracted about 83 million people in 2013, compared to about 73 million in 2004.

The Red Cross this year added 22.5 hours of training and certification specifically for extreme shallow water rescue. The Aquatic Attraction Lifeguarding course includes techniques for handling and removing people, which can be different than in deep-water pools, and first-aid training emphasizing care for head, neck and spinal injuries.

“We laser-focus on the specific kinds of things that would occur in 3 feet or less,” said Stephanie Shook, who designed the program as Red Cross senior manager of instructor engagement. “The kind of things that typically happen are slips, trips and falls.”

The organization worked on the pilot program with SeaWorld Parks & Entertainment, which operates seven U.S. theme parks with waterpark attractions.

“The Red Cross recognized the growing industry and the need to cater the training to that,” said Philip Boykin, operations manager at Water Country USA, which is part of SeaWorld's Busch Gardens in Williamsburg, Virginia.

Nearly 1,000 people have taken the extreme shallow water training since it launched in January, the Red Cross said. It notes that the number trained is likely much higher because the group's figures include those like Machemer, who is certified to teach it, but not the people they then instruct.

Beyond more training for lifeguards, Machemer said the shallow depths give non-swimmers a false sense of safety and too many children go to waterparks without knowing how to swim.

“I do believe that the lack of swim lessons in today's age has also caused some of the problems we're seeing at the waterpark — that people just aren't comfortable swimming as they used to be,” he said.