Assisted-living company gets LEED platinum by switching to modular construction 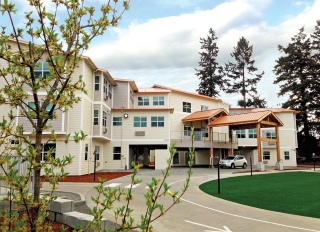 Photos from Elite Care [enlarge]
Sylvan Park was the first modular elder care community in the nation to earn LEED for Homes platinum.

Since 2013, its campuses have been constructed using that method, said Jason Hess, chief executive officer of the Tigard, Oregon-based company.

The campuses are Fanno Creek in Tigard, with 24 residential suites; Oatfield Estates in Milwaukie, Oregon, with 96 suites; and Sylvan Park in Vancouver, with 48 suites.

The suites are in buildings that look like houses. Most of them are LEED for Homes platinum — and the company is targeting that level of LEED for all its developments.

Elite Care plans more campuses in Oregon, he said, and to expand into northern California, where it has investors and relationships with Sutter Health hospital system. It does not have immediate plans for more Washington campuses.

Elite Care residents are in physical and/or cognitive decline, with 84 percent having some form of dementia. They are anywhere from 55 to 104 years old (although the average age is 88) and they typically are in the last three to five years of life.

They need help with what is known in the industry as activities of daily living. That's anything from brushing their hair to showering or using the toilet.

Hess said they pay $6,400 a month for room, board and care on average. If a spouse without care needs lives in the suite with the resident, they pay an additional $750 a month.

The campuses have two to eight three-story houses. Employee caregivers can live in one-bedroom apartments on the first floor of the houses for $600 a month, including board.

Hess declined to say what revenues are for the privately held company, but said Elite Care is profitable.

Hess said utilities are a “huge” cost for assisted-living facilities, and creating high-performance buildings, as Elite Care does, cuts those costs and helps the company lessen its carbon footprint.

Green features in the residential buildings and on the campuses include high-efficiency insulation, high-efficiency air conditioners, rainwater use in lavatories and community gardens, low-flow plumbing, tankless water heaters that service radiant piping beneath the floor, low-VOC carpeting and zero-VOC paint, triple-pane windows, Energy Star rated fans and appliances, and recycled concrete in retaining walls and gardens. 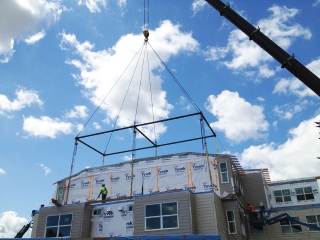 [enlarge]
Residential suites were craned into place at Sylvan Park.

Hess said there's also purified drinking water at sites on the campuses, and shower water is dechlorinated as chlorine is tough on the skin of frail elders.

Modular helps Elite Care get its campuses built quicker. Hess said its two-house with a breezeway model can be manufactured in a little over 100 days. It then takes about 3.5 months to truck and crane into place the modular units, with the site work done in tandem.

That compares with the year wood-frame construction takes, Hess said. However, he said, Elite Care has not found modular to cost less to construct.

The company said its Sylvan Park development was the first modularly constructed elder care community in the nation to earn LEED for Homes platinum (in 2014).

Hess said other West Coast assisted-living facilities are not being built modularly, partly because of the false notion of modular as mobile homes “that blow away in Oklahoma,” he said.

He said modular is better quality construction than wood-frame because in a factory “everything is laser guided and precision cut” and the construction is not subject to the elements.

Hess said the more acceptable modular becomes to society, the more it's going to be used. “It's like turning the Titanic. It's not a speedboat.”

Hess holds a bachelor's degree in civil engineering, with an emphasis in structural engineering, from Oregon State University. He joined Elite Care as CEO in 2008. Prior to that, he was CEO at OneCreditSource.com in Oregon. He also worked for 14 months as a design engineer for NW Natural, a publicly traded utility headquartered in Portland.

He said he understands engineering, but knew he would not be in it long term.

He got the engineering degree at the encouragement of his mother, a former radio sales executive.

Hess said, “My mom said pick the hardest degree, and that's what you're getting — congratulations. She said engineering degrees open doors, business degrees are for people who like to drink on Friday.”

The CEO said LEED for Homes is not difficult to achieve. With triple-pane windows and high-efficiency insulation and such, you are well on your way to an energy-efficient building and LEED, he said.

Hess said Bill Reed, a Portland-area real estate investor and developer who founded Elite Care in 2000 with his wife, Lydia Lundberg, came up with the idea of going modular.

“Bill is one of the most innovative guys I've ever met,” Hess said. “He was doing LEED platinum buildings before LEED platinum was defined by the U.S. Green Building Council.”

Reed and his wife were also influenced to go into the industry after they decided the continuing care retirement community Bill's parents were living in was somewhere they would not want to live, Hess said.

Bill Reed's son, Mark Reed, is president of Portland-based Northwest Ventures Group, which is paid a fee to develop the Elite Care communities and help in the LEED certification process.

Hess said Elite Care tries to get its residents to be social. The 1.5- to 2-acre campuses have trails and also greenhouses in a “destination” building where people can do organic gardening, and where other events are held.

The houses don't have long institutional hallways. There are common areas in them where residents can do puzzles or play piano, and there are open kitchens where chefs can talk to residents, and employee caregivers take their meals with residents.

A few years back, the company received national news coverage for its use of technology, which now extends to all its campuses. That includes electronic devices under beds that alert employees if a resident is trying to get out of bed, special lighting in the suites to improve residents' moods.

In the new buildings, there are also sensors in the walls that alert employees if a person falls while in the suite.

Also, residents wear electronic badges that track where they are on campus.

Employees also electronically note how residents are faring, such as how much they ate that day or if they gardened. Relatives can monitor that information over the Internet.

Guerdon Modular Buildings is the modular manufacturer for the Knoll Summit and Oak Hills campuses.

OneBuild was the manufacturer for Sylvan Park, and Modern Building Systems was for the second phase of Oatfield Estates.