Tours of the 520 bridge jobsite are a hit 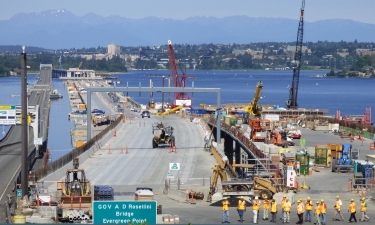 Photos from WSDOT [enlarge]
Tour participants in June got a look at the westbound lanes of the new SR 520 floating bridge. 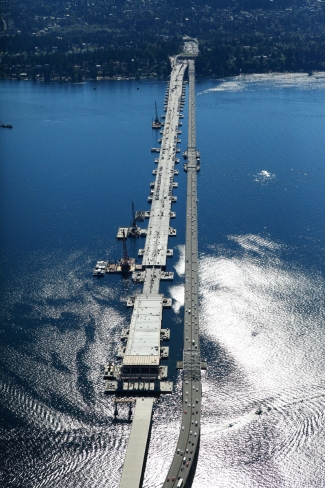 [enlarge]
All 77 pontoons were recently linked on Lake Washington.

ON THE ST. CROIX RIVER, Minn. — Jockeying for a rail spot on the third-floor deck of a St. Croix River paddlewheel boat starts an hour before departure. Up there are prime views of the towering piers, protruding concrete segments and barges full of heavy equipment — all elements of one of the biggest, most expensive bridge projects the Upper Midwest has seen.

Construction of the mile-long span linking Minnesota and Wisconsin has given rise to an unexpected tourist market: Guided 90-minute tours to watch crews assemble the bridge a segment at a time, like a Lego set. Three times a month, 350 or more people cruise the river; adults pay $10 apiece.

From the $3.9 billion Tappan Zee Bridge replacement in New York to a floating bridge outside Seattle, bridge construction tours around the country are regularly filled to capacity, too. Transportation officials and contractors say the surprising popularity stems from several things — people are awed by the sheer size of the bridges, thirsty for details about the materials and methods used or just curious about why they take so much time and taxpayer money to erect.

“You don't get a major interstate highway bridge every day in your town. ... The larger the project is, the more the interest is,” said Karen Lehehan, who expects to lead 400 people this year on tours by foot of the George V. Voinovich Bridge project over Ohio's Cuyahoga River. “I have a Rotary Club coming in September. I did Cub Scouts last year; apparently you can get a badge visiting a construction site.”

Passengers on a double-decker paddlewheel pay between $88 and $93 for a cruise — lunch included — down New York's Hudson River to see the new 3.1-mile Tappan Zee span take shape. Larry Singer, who coordinates the tours for the Historical Society of Rockland County, said the four tours have drawn about 140 people so far, and a fifth is set for September.

“The response was so much more than I ever envisioned,” he said.

And in Washington state, hundreds of people enter monthly drawings to win one of 30 slots for a free walking tour of the construction zone on the state Route 520 Floating Bridge, the foundation for which includes giant concrete pontoons that sit above the lake bed. Participants must wear helmets, reflective vests, heavy-duty footwear and long pants — and sign a liability waiver.

Minnesota first experimented with such tours as crews moved quickly to replace the Interstate 35W bridge in Minneapolis after the deadly rush-hour collapse into the Mississippi River on Aug. 1, 2007. The weekly walkabouts were aimed at demystifying the construction process and reassuring a motoring public that was suddenly wary about bridge integrity.

Tours of the St. Croix River Crossing are in their second year. Heavy first-year demand prompted transportation officials and a partner riverboat company to add more trips and use the biggest boat in the fleet. Engineers from Minnesota and Wisconsin take turns sharing historical and technical tidbits as passengers contort themselves for the best camera angles or kick back with cold drinks. Workers wave from high above.

“I'm going to speak over the noise here,” Minnesota Department of Transportation construction engineer Terry Zoller said, the rattle of hydraulic tools and pounding hammers competing with his account of how each pier in the bridge foundation was anchored in bedrock as much as 140 feet beneath the water's surface.

“You can watch someone build a house but it's not anywhere near the engineering of a project like this,” Wert said. “It's unique. This is really amazing.”

When the bridge opens next year, it will carry 18,000 vehicles a day and could ultimately cost up to $646 million when new approaches in both states are factored in.

Jeff Melby, a retired physicist who drives by construction zone almost daily, didn't fully appreciate the scale until his up-close look. He marveled at the engineering, particularly the piers that look like giant tuning forks.

“It's not the 7th Wonder of the World,” Melby said, “but certainly for us it's a big wonder.”