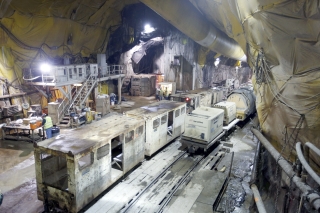 LAS VEGAS — It took $817 million, two starts, more than six years and one worker's life to drill a so-called “Third Straw” to make sure glittery casinos and sprawling suburbs of Las Vegas can keep getting drinking water from near the bottom of drought-stricken Lake Mead.

The pipeline, however, won't drain the largest Colorado River reservoir any faster. It's designed to ensure that Las Vegas can still get water if the lake surface drops below two existing supply intakes.

“You turn on the tap, you don't think about it,” said Noah Hoefs, a pipeline project manager for the Las Vegas-based Southern Nevada Water Authority. “These are the things being done in order to live the lifestyle we want in the places we want to live.”

It's the latest example of ways the parched West is scrambling to deal with 15 years of unprecedented drought.

California is encouraging homeowners to rip out thirsty lawns and asking farmers to turn off spigots. And in New Mexico, a $550 million pipeline project would supply drinking water to several communities that run the risk of having wells go dry within a decade.

“Unlike California and our other partners on the river, we are almost entirely reliant on Lake Mead,” said John Entsminger, water authority general manager. “We couldn't afford to wait.”

Sin City gets about 90 percent of its drinking water from the lake behind Hoover Dam, itself an engineering marvel that cost the lives of about 100 workers during five years of construction before it was completed in 1936.

The need for the new pipeline can be seen in the wide white mineral band marking rock canyon walls where lake water has receded and the sun-bleached docks at abandoned marinas, left high and dry.

The water level has dropped almost the equivalent of a 20-story building since Lake Mead last topped the dam's spillways in 1983.

Jim Nickerson, project manager for Vegas Tunnel Constructors, a subsidiary of Italy-based Impregilo, peered during a recent tour into the circular intake, which is designed somewhat like a big bathtub drain. The 100-foot structure was lowered in March 2012 into what once was a Colorado River canyon and cemented into place with the equivalent of 1,200 truckloads of concrete.

Its dome roof was capped by a 1,900-pound stainless steel ball.

Above that was about 300 feet of water. The lake is about 37 percent of capacity, but still contains trillions of gallons of water — mostly snowmelt from the Rocky Mountains in Colorado, New Mexico, Utah and Wyoming.

Pumping will mark completion of a perilous project.

The tunnel flooded in July 2010, when a drilling machine hit a geologic fault, and flooded again five months later. Project engineers abandoned and capped the first tunnel and started a new one in a different direction.

In June 2012, tunnel worker Thomas Albert Turner died. He was a married, 44-year-old father of two from Henderson whose brother also worked on the pipeline.

Pulling the plug won't hasten creation of the “bathtub ring” around the lake. Blame drought for that — and exponential growth in a desert area that averages just over 4 inches of rain per year.

Las Vegas had about 126,000 residents when it began drawing water from Lake Mead in 1971. It now has 2 million residents and 40 million tourists a year.

The top of the new intake structure is at 860 feet. That's 40 feet below so-called “dead pool” at which Hoover Dam electricity turbines would be idled and no water would flow downstream.

Water managers let the Lake Mead level fall to a new record low late Tuesday, at just under 1,075 feet. They say the lake level will rise by the end of the year to about 1,081 feet. That's 6 feet above the trigger point that would require a percentage cut in water supplies to Arizona and Nevada.

Officials give Lake Mead a nearly 50-50 chance of ending 2016 below the 1,075-foot trigger point — unless the drought is broken.