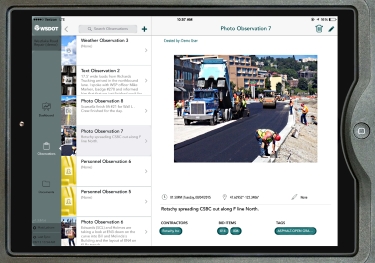 Photo courtesy of Pavia [enlarge]
Seattle-based Pavia Systems developed a digital tool for road inspectors that allows them to complete their documentation on site.

Si Katara's path to the construction industry was an indirect one.

After graduating from the University of Washington in 2000 with a degree in computer engineering, he headed for Silicon Valley, where he developed computer network products for companies like Cisco Systems.

Meanwhile, his college friend George White remained at UW, where he was a research engineer in the civil engineering department.

Katara said the two kept in touch, which turned out to be a good thing. White invited him back to UW to check out the work he was doing with professors there to explore commercial opportunities in transportation infrastructure.

Katara was impressed enough to stick around and help start a new company, Pavia Systems, which he co-founded with White in 2005. Pavia (pronounced pah-VEE-uh) reflects both of their interests with its focus on applying technology to the transportation industry.

Katara said Pavia was the first startup to spin out of UW's civil engineering department. Two engineering professors Katara and White worked with, Joe Mahoney and Steve Muench, are now directors for the company.

Today, Pavia has 10 employees, and its offerings include Web-based training and pavement design tools, and consulting services. The office is near Lake Union in Seattle's Westlake neighborhood.

The company is excited about its newest product, HeadLight, an app-based tool that allows road inspectors to document information on site using a mobile device, such as an iPad.

Road inspections are typically done with pencil and paper and are supplemented with photos. Inspectors then head to the office to type up notes and file daily reports.

Using HeadLight, inspectors can complete all their documentation and file reports from their iPads without running back to the office or jumping into a truck to use a laptop. Inspectors can collect data, photos and videos; file emails directly under projects; flag areas of on-site concerns in real time; and generate QR codes for tracking materials.

Pavia did its first pilot test of HeadLight in 2014, working with state transportation agencies in Washington, Texas and Minnesota.

“One of the key results from pilot inspectors in the field was that people were saving an hour and 45 minutes every day using HeadLight,” Katara said.

Inspectors were also found to be getting much more data and better-quality data than they could using the old process, and they increased their on-time reporting submissions 51 percent, he said.

Municipal highway projects tend to have more documentation needs than comparably sized private projects, and so HeadLight is designed to meet the specific needs of public agencies and their contractors. Katara said he expects competition will arrive soon, so he's feeling urgency to “get out there and get market share.”

Public highway construction spending topped $164 billion in 2013, according to the Congressional Budget Office. Katara estimates 10 percent of the cost is for inspection and verification, which means there's a big market out there for products like HeadLight.

One advantage HeadLight may have is its specialization. It was developed after talking to dozens of potential users about their business processes, and how the product could be designed to best respond to their needs.

Much of this research took place “before writing a line of code or creating a single interface,” Katara said.

HeadLight has since been tested at sites around Washington, Minnesota and in the Houston area. It was officially released last fall.

Mark Holmes, a construction engineering supervisor at Everett-based Perteet, said the company had been looking for some time for a digital product like HeadLight. Perteet's eight field inspectors have been using it since July.

Holmes said inspectors have specially equipped iPads that are waterproofed and shockproofed for use outdoors, and come with handles and straps.

“The transition (to HeadLight) has gone extremely well,” he said. “Our inspectors are spending less time doing (daily construction reports).”

Information from inspections is uploaded into a cloud-based system that can be retrieved and analyzed later. For example, if there's a claim on a project, users can pull up records on activities over particular date ranges, or check work hours for the crew on a particular day.

Katara said Perteet has been working with Pavia on developing additional software capabilities, but said he hopes to hold the line on feature creep, favoring simplicity and balance over trying to do too many things.

Katara said HeadLight has already been used in ways he didn't anticipate. On a job in Minnesota, an inspector used the app to record noise levels at multiple locations before and after building a sound wall, then measured the differences to calculate how well the wall worked.