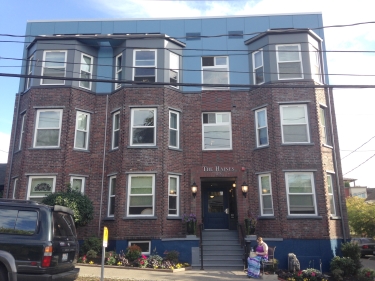 The Haines apartment building lets low-income people live near the services that they need in a quiet residential neighborhood on Capitol Hill.

But remodeling the 30-unit Haines to accommodate its senior citizen tenants was not without its challenges, as CHH set out to give the building a makeover while not interrupting the daily lives of its tenants.

“Any challenges we had along the way were overshadowed by our strong desire to make this project work and maintain our mission of providing affordable housing for people on Capitol Hill,” Porter said. “Everyone was so excited about the project that we took a can-do attitude.”

Sheppard, who also is manager of Marcus & Millichap's Tax Credit Group in Seattle, said the building sold on the condition that it remain as low-income housing.

“The most important thing for us was to preserve the affordability,” Porter said. “We felt like the previous owner really did the right thing.”

It took CHH more than a year to “align subsidies” to make the renovation feasible, Porter said. That involved setting up funding from the State Housing Trust and the city's housing levy, as well as underwriting from the Seattle office of Raymond James.

General contractor Marpac Construction of Seattle led the project, which began last October and wrapped up in April.

Marpac project manager Nat Nguyen said his main role was coordinating with tenants — working in the units but not disturbing the senior citizens.

“The biggest challenge was that the building was fully occupied,” Nguyen said. “We wanted them to see us as little as possible.”

Porter said that was accomplished by working with the schedules of the tenants. CHH provided tenants with lunch and meal cards that they could use while workers were renovating the apartments, and had the option to temporarily move tenants to another property it owned if the work was too disruptive.

“We didn't move anyone around (during the nine months of construction),” Porter said. “And we got as much of the work done as quickly as possible.”

Porter said the project was not a major rehab, but kitchens were remodeled and re-plumbed, and flooring was re-done. Workers replaced the aging heating system with a hydronic system, which is a water-based system that delivers heat through emitters in each room.

In addition to new doors for the rooms and kitchen cabinets, Marpac installed a new roof, replaced some siding, installed a new fire alarm system and restored exterior masonry.

Environmental Works was the architect.

For Nguyen, who has been with Marpac for 10 years, the Haines project was familiar territory. Marpac also did a major renovation of the 100-year-old Pacific Hotel at 317 Marion St. in 2013 — coordinating the interior/exterior renovation while residents stayed in their units.

“We have extensive experience in that area,” Nguyen said.

Marpac was also the general contractor on a much larger CHH project: the 88-unit 12th Avenue Arts building on Capitol Hill.

Sheppard's limited liability company bought The Haines in 2001 and he said he realized by 2012 that the building would need more renovation than he was willing to invest to make the project pencil-out. He said the apartment was built in 1910 and had a third story added in the 1970s.

Sheppard was adamant that it remained low-income housing.

“I didn't want to sell to somebody to convert to market-rate housing if I didn't have to, because there's a need for affordable housing,” he said. “It made more sense for someone else who had more (public) financing that I couldn't tap into because I wasn't a nonprofit. The opportunities for a nonprofit to acquire the building to benefit the existing tenants outweighed any other options.”