N.J. company says it can lower emissions from concrete by adding carbon dioxide to the mix 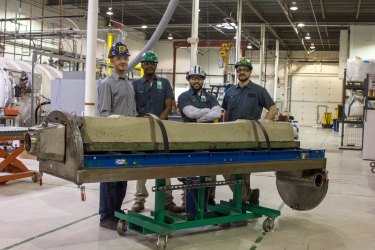 Images from Solidia Technologies [enlarge]
This railroad tie was made with CO2-cured concrete.

Though concrete made with traditional Portland cement has been a fixture in construction for many years, concrete researchers and scientists are constantly seeking ways to improve their product.

Bruce Chattin, executive director of the Washington Aggregates & Concrete Association, said the concrete industry often doesn't get credit for advances and innovations that can lower concrete's carbon footprint — particularly in an era when builders are acutely aware of the effects that building materials have on global warming.

“I would tell you that, worldwide, the cement and concrete industry has made tremendous strides in creating a low-carbon product,” Chattin said.

But, he said, any new concrete product must live up to the promise of cutting its carbon footprint.

One of the contenders in the new product market is Solidia Technologies.

The New Jersey-based company has an exclusive licensing agreement with Rutgers University for a patented cement and concrete technology that President and CEO Tom Schuler said is at the forefront of environmentally friendly concrete.

Solidia's method dramatically reduces cure time and saves money and water while reducing carbon emissions by 30 percent, according to Schuler, who added that carbon emissions from cement and concrete production are responsible for up to 5 percent of total global carbon emissions. 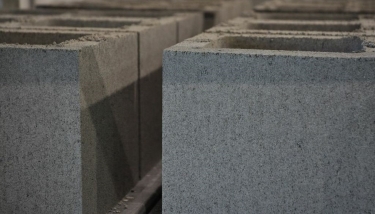 [enlarge]
Blocks and other precast elements can be made with CO2-cured concrete.

Schuler said his company's concrete has large- and small-scale applications and can be easily adopted by concrete manufacturers. Current applications are all precast: paving stones, concrete blocks, railroad ties and pervious concrete. The company has not reached the stage of using its product for pours at construction sites.

“We have overcome the biggest obstacles to disruptive innovations: ease and cost of adoption,” Schuler said in a press release. Schuler and other Solidia executives are in France this week meeting with European concrete manufacturers.

“We make sustainable technologies easy to adopt anywhere in the world using the industry's existing infrastructure, raw materials, formulations, production methods and specifications,” he said. “We're making it easy for one of the world's largest industries to go green.”

Solidia's method creates carbonation in the curing process, reducing the need for water while also creating a stronger product that cures more quickly, according to Schuler.

The process relies on carbon dioxide to bind the elements, reducing curing time from three weeks to eight hours.

“The process does not require any changes to the existing concrete supply chain,” Schuler said.

“When the reduced CO2 emissions associated with Solidia cement production are considered along with the ability of that cement to consume CO2 during concrete curing, the CO2 footprint associated with the manufacturing and use of cement can be reduced by up to 70 percent compared to (Portland cement),” Solidia principal scientist Sada Sahu said at the conference. “As water is not consumed during the curing process, the mix water can be recovered and recycled.”

Solidia has worked for more than a year with Swiss cement and concrete mega-manufacturer LafargeHolcim to test Solidia's cement and its feasibility for commercial-scale production, according to Schuler. 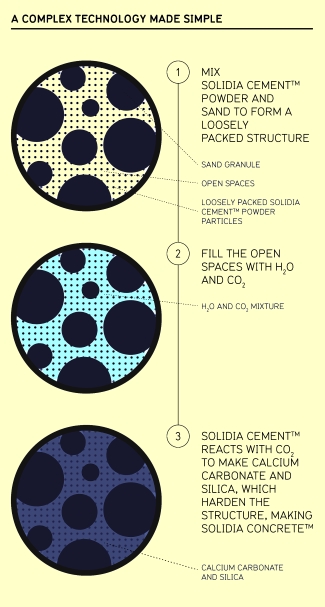 Solidia has been building a base of customers for its concrete blocks, pavers and roof tiles in North America and Europe. In addition, Solidia is working with United Kingdom-based CDS Group on the design and manufacture of curing chambers.

U.S. Concrete claims it creates concrete that is more sustainable by using supplemental materials such as fly ash residue from coal-burning electric plants and granulated slag, a by-product of the smelting process.

Chattin said the general rule in the concrete industry is that the creation of one ton of cement releases one ton of carbon dioxide into the atmosphere. He said the industry is open to new innovations that will reduce concrete-production's carbon footprint.

“We might see a low-carbon alternative to Portland cement that will be a viable option,” Chattin said. “I think it will come and we may not be all that far away.”

But he said concrete is a low-profit-margin industry that must comply with local and federal guidelines, including stringent seismic standards in areas such as the Northwest.

For a new product such as Solidia's concrete to be widely adopted, Chattin said concrete manufacturers will need a guarantee that it is safe and cheaper.

“Markets like Seattle are very innovative because the Northwest is the epicenter of the green market and (concrete) producers may say they're willing to take that risk” of adopting a new technology, he said.

“Someone must be the first in a marketplace to adopt a new technology, but there are risks and rewards,” he said. “People will not make these types of investments just because something new comes along.”

A company such as Solidia, he said, “has to be a viable, ready player with all the testing and research in place before the industry makes a switch.”