By KATIE WILSON
The Daily Astorian 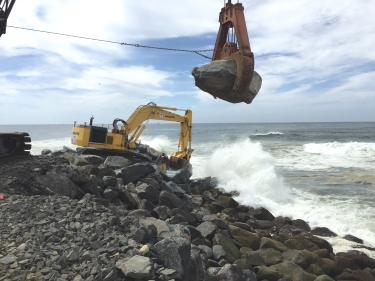 CAPE DISAPPOINTMENT — Even with the huge dump trucks and massive cranes of the modern century to replace the steam engines and army of laborers of the early 1900s, jetty work remains no small task.

Battered by decades of Pacific storms and waves, all three jetties at the mouth of the Columbia River have needed repairs.

Like a giant hose nozzle, the North and South jetties were designed to accelerate water through the river's mouth, keeping vital channels open to boats and ships and making the often-deadly Columbia River Bar crossing slightly less hazardous. Jetty A, extending out from Cape Disappointment protects the North Jetty.

Critical repair work initially estimated to cost $80 million just wrapped up at North Jetty in Cape Disappointment State Park. The U.S. Army Corps of Engineers, the agency charged with maintaining the three-jetty system, said it was losing dozens of feet of the 2.5-mile-long jetty each year as waves and wind ate away at the nearly century-old structure.

“The work that we're doing now is certainly done a lot better than how we originally built these structures, which was really just dumping rocks,” said Army Corps project manager Jerry Otto.

Since last fall, contractors have been out in the area between the popular Waikiki and Benson beaches, filling in a lagoon that undermined the stability of North Jetty's base, trucking in enormous rocks — some weighing more than 20 tons — and rebuilding the jetty's deteriorated head. Approximately 54,000 tons — about 110 million pounds — of rock went into critical repair work this year. This is about 35 percent more rock than was initially planned. Last week, big cranes that have been positioning new rock on the jetty since the spring were moved off the jetty. Just in time, too. A wind and rain storm hit the coast the next day.

The North Jetty contractor was Chico, California-based J.E. McAmis, which has an office and marine yard across the Columbia in Astoria, Oregon. Its contract was for $9.8 million. 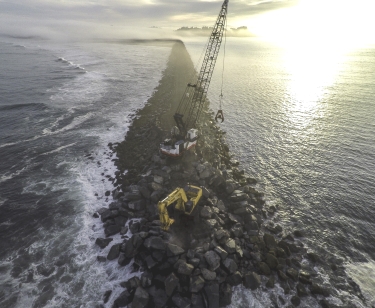 When North Jetty and its older and longer cousin, Oregon's nearly 7-mile-long South Jetty in Fort Stevens State Park, were first built, barges shipped in rock, steam engines took that rock along a rail system that extended out over the water, and men worked hard days dropping rocks over the sides once they arrived at the jetty sites. Innovations in rail cars resulted in cars that could be hand-cranked to tip a pile of rocks over the side. Pile up enough rocks around the railroad trestles and eventually you get the jetties we have today. (The old railroad trestles in Fort Stevens are still visible from the road.)

Contractors this time around have higher quality rock — rock that can better endure the tough environment. In addition, they know the jetty's durability has more to do with how well the rock is placed. The days of dumping are over.

“Our goal is to have as much contact (as possible) between the various rocks,” Otto said.

When contractors were placing rock this summer, trucks backed up along the length of the jetty to where a massive crane waited. Aided by people on the ground, crane operators would examine a number of rocks — often having between five and 10 different stones to choose from — turn them from side to side, getting feedback from workers below, reject one rock, pick up another and, one by one, place them strategically along the North Jetty. It was like they were assembling a giant jigsaw puzzle.

“The more contacts (places where the flat parts of a rock touch flat parts of the other rocks below) that you have between the rocks, the more durable it's going to be and less likely a big wave will come and knock it over,” Otto said.

It helps that the initial construction of all three jetties was so thoroughly documented. Hundreds of pictures exist of South Jetty, showing various stages of its construction and all the components that went into getting rocks off boats, onto rail cars and then onto the jetty. There are fewer pictures of North Jetty, but those that do exist clearly illustrate the labor-intensive process.

“We understand specifically what we've done,” Otto said. “Now our advantage with these projects is we have so much history on them, a lot of history on what their performance was. ...Because we study the sediment movement and we study the hydrology of the water in the system at the mouth (of the river), we understand that much more and to a greater extent than we ever did before.”

And, he added, most importantly, “we understand how it has changed over the years.”

Rehabilitation work on Jetty A, the small jetty set down from North Jetty, is set to begin soon, likely next year, though the Army Corps is not sure when yet. The agency only just awarded the contract and plans to have a pre-construction meeting with the contractor this month.

Full-scale rehabilitation work on the North and South jetties will likely begin in 2017 and take through 2021. The work the Army Corps is doing now is expected to keep the jetties in good working order for the next 50 years.