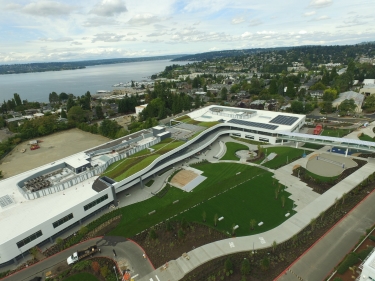 With years of construction management under his belt, Jackson Buck knows his way around a construction site. But Buck said computers and information technology have never been his forte.

“I'm a construction guy, not a technology guy,” Buck admitted.

That is, until now. Buck said his company, SRM Development of Spokane, in the last year has used a small fleet of company-owned drones to track construction progress and create images that are valuable for marketing completed projects up and down the West Coast.

As commercial applications for drones rapidly expand, construction companies such as SRM Development are jumping on board, with the hope of shaving construction costs through surveying and monitoring from the air, while also improving jobsite safety.

That trend coincides with the expansion of drones in other commercial environments. Retailers such as Amazon and Wal-Mart have announced in recent years their plans to roll out drone delivery in an attempt to cut delivery times. This week, Wal-Mart announced it would seek federal permission to deliver goods and groceries to customers — either at their homes or designated spots in store parking lots.

Wal-Mart also said it wants to explore using drones for surveillance of its buildings and parking lots, to monitor activity in its distribution centers and possibly to move goods from distribution centers to its stores. And Amazon CEO Jeff Bezos this year said he foresees drones one day becoming as common as mail trucks for deliveries.

In the construction world, drones have the potential to vastly improve the quality assurance process during construction, according to Mike Bratter, co-founder of Seattle-based Aerial Scouts. The company provides aerial data and photography from drones for construction companies in Western Washington.

Bratter said he is hoping Aerial Scouts can generate business from Seattle construction companies that can benefit from drone photography.

But selling the concept to construction firms is the first major hurdle that Bratter said he faces.

“When the companies hear about our aerial work, they say ‘We use airplanes,'” Bratter said. “We say ‘Your airplanes are taking photos from 1,000 feet, but we can use our drones and fly 20 or 30 feet above your site and get detailed images for your inspection.' We can take a series of photos and merge them into cohesive images, giving a bird's-eye view of the whole area at low altitude without anyone hurting themselves.”

Such imagery, he said, has been collected in the past by project managers who hire aerial photographers or who even go to the top of 40-foot cranes to capture the best aerial images.

Bratter said drones can perform accurate measurements between sections of a post-tensioned deck to confirm the rebar and cables are adequately spaced away from electrical and plumbing lines.

“These maps are geotagged and can also be accurately laid over CAD plans for future uses if there is the need to drill holes in concrete and locate plumbing/electric lines or repair sections at a later date,” he said.

For Scott Weston, senior superintendent with Exxel Pacific in Seattle, the use of drones can mean savings in the tens of thousands of dollars on each project.

By using drones to photograph post-tensioned decks, Weston said his company can study the project's cable grids and overlay plan images to ensure the cables line up — avoiding the liability of having to correct a mistake once concrete has been poured over the cables.

While Exxel previously paid $300 for five shots using aerial photography from planes, Weston said for the same amount of money he can get 100 photos and video. “You get more of what you need,” he said.

For Buck, having a fleet of four drones has saved thousands of dollars. Buck said on past projects he paid aerial photography companies $50 to $100 per photo at a monthly expense of $1,000 during construction. But he said conventional aerial photos from 1,000 feet do not offer the detail and convenience of drones. The $1,000 per-drone investment, he said, continues to pay for itself.

“Primarily, what we use drones for is capturing progress of where we are and utilizing those photos and videos during weekly meetings,” Buck said. “We can sit in a room and look at a screen (showing images of the site) and have a discussion with the building architect or engineers. We can stream live our video directly with anyone who has an Internet connection and answer any critical questions that are raised.

“Everyone knows a picture is worth a thousand words,” he added. “So let's take that a step further and stream those images to people working on the project.”

The adoption of drones for commercial purposes has the FAA scrambling to find ways to protect people in dense city areas and to avoid collisions with aircraft, especially near airports.

Current FAA rules require that commercial drone operators be licensed pilots and have what the FAA calls an “unmanned aircraft operator certificate.” Operators must also keep drones in their lines of sight and operate during daytime under 400 feet, using drones that weigh no more than 55 pounds.

The FAA has granted more than 2,000 commercial use drone permits as of Oct. 22. For private drone use, the FAA is working on a drone-owner registration system and will announce recommendations for that next month.

For his business, Bratter said he applied for and received FAA approval to operate drones. He employs helicopter pilots to operate the drones, while Buck said his use of drones falls into the “hobbyist” category and he is not required to have FAA approval.

Buck said the drones his company uses are “amazingly simple to fly and a child could operate one with no instructions.”

A breakdown of the number of construction and engineering firms using drones is not available from the FAA, but companies across the United States are finding potential uses. For example, earlier this month the architecture, engineering and construction firm Burns & McDonnell of Kansas City, Missouri, received FAA approval and has used the drones for inspecting terrain for transmission lines.

In Seattle, Bratter said he knows of no other company that offers drone services for construction projects. To expand the business, Aerial Scouts wants to sign up local construction companies on annual retainer contracts. He said he is in talks with several companies to set up such contracts, but declined to name them.

For Exxel, which hires Aerial Scouts, the investment is well worth it.

In West Seattle, at Exxel's 136-apartment mixed-use building, Weston said the drones will be needed about a dozen times — shooting every PT deck on the three-building project.

“For us, drones are leaps and bounds over what we've had before,” Weston said. “They're a money-saver and a time-saver.”