Utilities say they can save big bucks by using drones to inspect power lines, towers 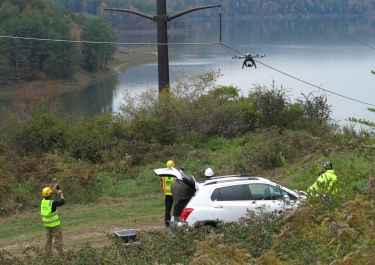 BLENHEIM, N.Y. — U.S. utilities see great potential in the use of drones to do the often-dangerous work of inspecting power lines and transmission towers but strict regulations have so far slowed adoption of the technology.

The remote-controlled devices make the work of linemen safer, more efficient and less expensive, according to the Electric Power Research Institute, which recently put on a three-day workshop to help nearly a dozen utilities choose the best machines for the job. Miniature helicopter-like drones, some equipped with cameras and other sensors, conducted demonstration inspections of transmission lines at a hydroelectric plant in the Catskill Mountains.

“We want to start using drones next spring when the inspection season begins,” said Alan Ettlinger, research and technology director for the New York Power Authority, who attended the workshop.

Utilities spend millions of dollars inspecting power lines, which are often in hard-to-reach places. The industry has been interested in the potential use of drones for years, but has been slower than European companies to adopt the technology because of U.S. regulatory restrictions.

While hobbyists can fly drones without certification, the Federal Aviation Administration requires special certification for commercial users. There are numerous conditions and limitations: The drone operator needs a pilot's license, the aircraft must weigh less than 55 pounds, flights can go no more than 200 feet above the ground, and the drone must be operated in the pilot's line of sight.

The FAA treats the operation of drones like any other aircraft for safety reasons and commercial operators face strict rules for getting permission to use them, according to the agency.

Seven U.S. utilities have been granted FAA approval for testing drone technology in 2015. Consumers Energy in Michigan conducted a series of tests over the summer using its own eight-rotor drone and unmanned aerial vehicles operated by outside vendors to inspect wind turbines, utility poles and transformers. The utility is part of a UAV task force under the Edison Electric Institute, the association representing U.S. investor-owned electric companies.

“When you look at the amount of information we can gain to make accurate decisions about our systems, and look at the cost and time savings, this is a huge opportunity for us,” said Andrew Bordine, a Consumers Energy executive.

The UAV system Consumers Energy uses starts at about $10,000, Bordine said. Sensor attachments range from a few thousand dollars to upward of $100,000, he said. But the cost savings are far greater than the investment.

Consumers Energy spends several hundred thousand dollars a year to send people out in the field to do mapping and measuring of its electrical system, Bordine said. A UAV equipped with “lidar,” the sensor technology used to develop driverless cars, can collect the same data and more at a small fraction of the cost and time.

“With wind turbines, you'll have a couple of guys hanging off the blades by a rope a couple hundred feet in the air to do inspections visually, at a cost upwards of $10,000 per site,” Bordine said. “We can get the same results with a UAV for $300, without putting workers in danger.”

The Bureau of Labor Statistics reports 17 fatal work injuries among utility workers in 2014, but doesn't specify the cause.

Other industries, including oil and gas drillers, pipeline operators, construction companies, and agriculture are also investigating the use of drones to make inspection and mapping tasks faster, more accurate, safer and less costly.

“The main advantage we provide in small unmanned assets is safety,” said Mark Sickling, chief pilot for Cyberhawk, a drone company based in the United Kingdom that does aerial inspections for utilities and the oil and gas industry. At the workshop, Sickling demonstrated Cyberhawk's most popular drone, the eight-rotor G4 Eagle, which boasts “unprecedented flight and image stability.”

The work done by Consumers Energy over the summer could also be done with a drone flying without direct human control using instructions entered into an onboard flight computer if the FAA allowed it, Bordine said.

“The FAA is looking at how to revamp its requirements to make the technology more accessible to more companies,” Bordine said. “A goal for me would be to get FAA approval to work with a remote application and an autonomous flight.”