By KAILEY FISICARO
The Bulletin 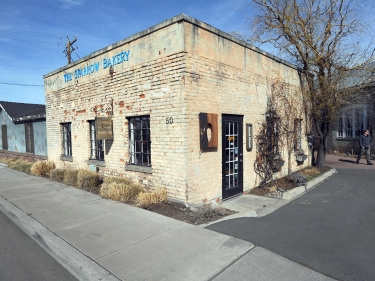 Ryan Brennecke/The Bulletin via AP [enlarge]
The Sparrow Bakery has operated in the old office since 2004.

BEND, Ore. — Nearly 100 years ago, it wasn't warm ocean rolls changing hands at S.E. 50 Scott St. — it was cold, hard cash in exchange for work at the foundry.

The walk-in-sized vault inside The Sparrow Bakery makes it look like the old brick building could have once been a bank.

But former employees of what used to be Mid-Oregon Iron Works can all attest the little brick building was actually the business office — where the payroll for Bend Iron Works was likely once kept, beginning around the time the building was built, circa 1921.

Steve and Jennifer White, of Bend, have owned the 2.25-acre parcel and the buildings on it, where businesses from The Workhouse to Sunlight Solar Energy reside, for about the last 17 years.

When the Whites purchased the property in 1999, the old office wasn't leased to a business at first.

When it comes to historic buildings, he explained, with great character comes great responsibility. White said calls come in all the time from tenants in the former Bend Iron Works buildings, including The Sparrow Bakery, who need repairs.

White and his wife are used to fixing up old buildings — the two have restored a number of historic sites around town.

In 2004, then-owner of what was called Blue Sparrow Baking, Jennifer Lonergan, thought the old office would be the perfect storefront for her bakery.

The Whites leased the space to her, and Lonergan became interested in finding out more of the building's history, according to a Bulletin article from 2004.

From doing some of her own research, and chatting with customers, Lonergan was able to piece together some of the building's history.

“Three trains used to come into this junction, and the trains would get worked on and turned around,” Lonergan said in the article. “They would do all the iron work here. This was the office for the iron works.”

Lonergan also detailed how she had asked Steve White to renovate some of the old office.

“I had him put a window in what was the old vault, which is my utility room, with sinks and storage,” Lonergan said in the article. “It has 14-inch-thick brick and concrete walls, floor and ceiling. It's huge.”

Back then, Lonergan said she didn't know what had been kept in the vault, but she was the one who sanded off the original door. She scraped “at least 10 layers of paint” to get down to the metal door, revealing its worn, original lettering, which can't be made out now.

Steve White agreed with Lonergan's understanding that the giant safe was used for payroll.

“In that day and age, so much of our economy was cash,” he said. “People didn't trust banks. They needed a vault, if they were going to have cash.”

“They did use it to hold payroll,” said Jim Schaedler, 69, of Bend, whose father co-owned Mid-Oregon Iron Works. This was not while his father owned it, but back in the early 1900s. “They put in a big (vault) there, I guess because years and years ago, I understand that they held payroll that was transferred through on the trains.”

Vanessa Ivey, manager of the Des Chutes Historical Museum, had also heard that when the trains came into town, payroll was dropped off at the Bend Iron Works assayer's office around the 1920s, “hence the large safe,” she said.

“Today rumor has it that the assayer haunts the building and does not like the door to where the safe was left open, so he closes it,” Ivey said in an email.

“We call him Jackson,” Keatman said matter-of-factly inside the bakery.

Once, when she was baking bread alone at the building, she left two loaves on a wooden table, she said. She turned away and turned back, and the loaves had disappeared, even though no one had come in.

“Sometimes we leave a tea and scone in there to make him happy,” Keatman said, adding staff usually keep the door open to the vault, which now serves as a storeroom. She's never seen “Jackson” close it though — or the door close on its own, for that matter.

Steve White said he and his family would learn the history of Bend Iron Works and the assayer's office bit by bit. As people came into the businesses there now, they could describe an “I remember when.”

“Sometimes people came by and said things to us,” Steve White said. “But lots of those people are dead now.”

Once she graduated from business school in Salem, Sharon Schaedler came back to Bend to work in the office.

When asked what type of work they did in the office, Sharon Schaedler laughed.

While she worked there from the late ‘60s to the early ‘70s, the vault wasn't used for anything as exciting as mountains of cash for payroll, as it likely was in the 1920s.

“Basically, we had our cash box in there, but it was open during the day,” Sharon Schaedler said. “It was only locked up at night.”

And she never noticed a cranky ghost trying to shut the door.