No cyborgs needed: MacDonald-Miller's smart glasses link field technicians with coaches back in the office 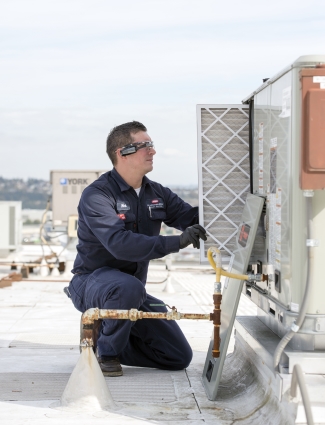 Photos from MacDonald-Miller Facility Solutions [enlarge]
A technician in the field can stream video back to a manager for advice.

Travis Eshpeter, a service foreman with MacDonald-Miller Facility Solutions, used to coach junior technicians through issues on job sites without actually seeing what they were working on.

Now smart glasses the technicians wear let Eshpeter see what the tech sees, making it easier and quicker to offer instruction and get the job done, he said.

The MacLens eyewear is clipped to safety glasses, and has a speaker and a microphone. The industrial grade cloud-based wearable computing device is powered by XOEye Technologies of Tennessee.

MacLens captures and streams photos and video to cellphones and computers, enabling first-person point-of-view and real-time back-and-forth discussions, including telepresence.

MacDonald-Miller is a Seattle-based design-build mechanical contractor with 10 offices in Oregon and Washington and about 1,000 employees. Its jobs can range from mechanical work for small tenant improvements to designing a complete mechanical system for a campus or high-rise building.

Its technicians now use MacLens on most service calls or preventative maintenance, with audio and video embedded into each summary to the customer of what was done or needs to be done at a job site.

“The customers love it,” said Bellevue-based Eshpeter, who oversees service and maintenance of commercial and industrial heating and air conditioning equipment. “It eliminates almost every question from customers as to what's going on.”

Eshpeter said the technology allows foremen to go to fewer job sites, but offer more interactive coaching. It also gives customers an overview of their equipment, which may be in remote sites, and speeds up approval of job quotes. It records how long-time employees or those with specialized training do things.

MacLens can, for instance, make it easier for a property manager to justify a repair to a building owner, because they can actually see the work to be done, Eshpeter said.

[enlarge]
MacLens is outfitted with a camera, microphone and speaker.

So far, 80 employees, mostly technicians, but also safety personnel and project managers, including those at the Lincoln Square expansion in Bellevue, have taken 2,400 videos and about 600 photos and engaged in 150 “telepresence” calls using the technology, Busick said.

Eshpeter said a project manager may use MacLens to document a situation where a blueprint calls for ductwork in a particular corner that already has a pipe or electrical conduit.

Initially, Eshpeter said, some employees thought MacLens would be like “Big Brother sitting watching you all day.” But it's not: “You're in control of what footage you capture ... and who you send it to,” he said.

Busick said safety personnel can use the smart glasses to record hazards in the field so they can be fixed. “It's kind of that adage ‘A picture is worth a thousand words,'” he said.

Some of the company's 30-plus year employees plan to retire soon, he said, and MacLens helps document their job-site skills for future training. “I think a lot of our competitors are just letting old people walk off the site” without capturing their knowledge, Busick said.

Also, MacLens can show a customer their HVAC system on the roof or their boilers in the basement, so they can make decisions without being on-site. “Frankly, I don't know how people are going without this,” Busick said. “They're flying blind.”

MacDonald-Miller is the only West Coast contracting company to use MacLens, he said. The glasses were developed specifically for field service technicians, but the company envisions other uses too.

It plans this year to have more of its sales people use them for real-time quotes to give the company a competitive advantage, Busick said.

For instance, a MacDonald-Miller project manager can use the glasses to help the sales team explain to a customer what can be done in a tenant improvement, rather than everyone getting into a car and going to the site and walking around with an iPad or iPhone trying to film and FaceTime, Busick said.

Also, he said, an “incredibly large retailer” for which MacDonald-Miller does tenant improvements and regular maintenance has asked the mechanical contractor to supply it with the smart glasses.

The company is considering pricing models for some customers who want MacLens as a conduit for MacDonald-Miller to decide in real time whether the customer's on-site facilities staff can take care of an issue, or if MacDonald-Miller needs to work it.

The MacLens may also help large companies operating in foreign countries who are MacDonald-Miller customers.

“We can't put someone on a plane to Italy in the same day,” Busick said.

MacLens also can provide proof for insurance claims that equipment was maintained, or that it was defective and needs to be returned to a manufacturer.

If the videos or photos show MacDonald-Miller has done something wrong, the situation can be remedied faster, Busick said.

MacDonald-Miller owns 85 MacLens devices. Busick wouldn't give the cost because of a non-disclosure clause in the contract. MacDonald-Miller leases the software that makes the devices run and has an agreement that the first batch it bought will get an automatic upgrade.