LA is already prepping for the 2028 Olympics, but will some venues be out of date by then? 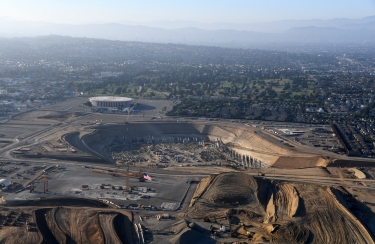 Kirby Lee via AP Images [enlarge]
LA Stadium and Entertainment District at Hollywood Park is under construction in Inglewood, Calif. The venue is a proposed site for the opening and closing ceremonies of the Olympics.

LOS ANGELES — By 2028, a new stadium being built for the Rams and the Chargers will have been beaten up by nearly a decade of NFL games. The seemingly intractable problems of Southern California — traffic and homelessness — might get better or grow worse.

So much can change in 11 years.

Los Angeles' decision to lock in an Olympic Games to far-off 2028 was praised by city leaders Monday as a deal that offers hundreds of millions of dollars in future benefits. But the longest wait time for any Olympics in the U.S. also comes with the risks of the unknown.

“It's a big chunk of time,” noted Jules Boykoff, a Pacific University professor who has written widely on the Olympics. “You just don't know what's going to come. The world presents surprises.”

History teaches that the economy swings up and down, sometimes with disastrous results. Political scientists foresee an era of continuing upheaval and unrest. Geologists say an inevitable big earthquake in quake-prone Southern California could damage venues envisioned as part of the Games.

Mayor Eric Garcetti shrugged off a question about the uncertainty.

“Los Angeles is resilient,” said the youthful-looking mayor, who will be granddad age, chasing 60, by the time of the Games.

“If the entire earth falls apart, probably the Olympics aren't happening in Los Angeles. But short of that, we are going to have a great Games here in LA,” the mayor told reporters.

In embracing the 2028 date that is expected to be finalized later this year, city Olympic organizers ceded the 2024 Games to Paris, which both cities had craved.

But Garcetti and other supporters argued that the four-year delay was advantageous, giving the car-choked city more time to build rail lines. Additionally, the delay comes with financial sweeteners that, among other things, will pump millions of dollars into youth sports.

But time rushes on, and major changes are bound to happen.

Los Angeles County is home to 10 million people, and that population could increase by more than 500,000 by 2028, state demographers project. The cutting-edge technology in the new NFL stadium, now scheduled to open in 2020, will probably look like the forgotten Blackberry by 2028.

Many athletes in their prime today will be in the bleachers in a decade. And how can officials accurately estimate ticket prices and the revenue they will generate? 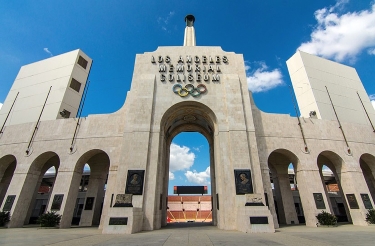 Photo from lacolyiseum.com [enlarge]
A $270 million renovation of the LA Coliseum, another likely Olympic venue, is expected to begin after the 2017 college football season.

Events that happened 11 years ago can seem part of a faded, distant past. Facebook was a mere two years old. Iraqi dictator Saddam Hussein was executed. Taylor Swift released her first album, and “Game of Thrones” was years into the future.

Consider the Los Angeles Memorial Coliseum. The nearly century-old iconic structure — which would be used in an Olympics for a third time after the 1932 and 1984 Games — was constructed long before modern building codes. It was also severely damaged in a 1994 earthquake. The coliseum is undergoing an extensive makeover, but experts have warned it could still be vulnerable to shaking.

Estimates vary widely on what the federal government would need to spend on security for the two-week event, by some accounts $1 billion or more. It's only a guess what the price tag will be in 2028, or the level of threat at that time.

Higher construction costs are likely, too. One example of the work that needs to be done: the Coliseum, a football stadium, would need to be converted into a venue for Olympic track events, then back again.

Over the years Olympics have been notorious for cost overruns, and studies have questioned if host cities benefit economically. Russia has struggled with costs from the 2014 Sochi Olympics, which have been called the most expensive Olympics of all time.

But Andrew Zimbalist, an economist at Smith College in Massachusetts, said LA was better positioned for a longer wait than other recent Olympic cities because its plan calls for no new major construction.

“They will be able to run an operating surplus,” he predicted.

In the shorter term, the private committee behind the LA bid must retool its initial 2024 plans for four years in the future, including renegotiating contracts for housing athletes and temporary venues, which were all hooked to 2024.

Another hurdle: With the change in date, LA apparently needs to renegotiate and extend financial guarantees approved by the city and state to cover potential shortfalls connected with the 2024 bid. Gov. Jerry Brown signed legislation in September that puts California taxpayers on the hook for up to $250 million if Los Angeles were awarded the 2024 Games and they ran over budget, and the city has promised the same.

Chicago-based sports-finance consultant Marc Ganis said the overall outcome was favorable for LA, given that Paris was in line for the 2024 Games. Additionally, financial sweeteners will help cover costs over the longer wait time.

“There is always going to be financial risk,” Ganis said, “when you are targeting 11 years into the future.”