Seattle makes another go at public potties, with toilets for Ballard and the U District 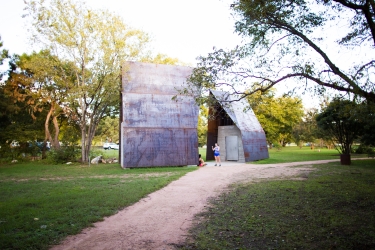 Photo from the Trail Foundation [enlarge]
These public restrooms in downtown Austin, Texas, won a small-project award from the AIA.

Seattle is ready to make another go at helping folks who gotta go.

The city has budgeted $600,000 for a pair of public toilets that could be installed in North Seattle by the end of the year. One is slated for the east end of Ballard Commons Park, and the other for the corner of Northeast 43rd Street and 15th Avenue Northeast in the University District.

But there's work to do before the project can move forward.

Gary Johnson, a coordinator with the city Office of Planning and Community Development, said the sites have not been finalized. Engineers will need to confirm the availability of underground water and sewer lines, and a vendor will have to be selected to maintain the toilets after they're installed.

Oh, and don't forget about the neighbors: There'll be a public engagement process to solicit their feedback.

This behind-the-scenes work will take place over the next several months.

Johnson has reason to be cautious. When it comes to public toilets, Seattle has seen its share of deal-breakers.

In 2004 the city spent $5 million to install five self-cleaning toilets in Pioneer Square, Pike Place Market, Capitol Hill, the International District and along the waterfront. But they were shut down just four years later because people were using them for illegal activities such as prostitution and drug dealing. So the city sold them on eBay in 2008, netting only around $12,500.

In 2013, the Seattle City Council backed a plan by Urban Visions to install a more basic public toilet in Pioneer Square, called the Portland Loo (more about that below). The toilet would have been a condition for allowing extra height for the developer's 200 Occidental project, now home to Weyerhaeuser's headquarters.

That plan never materialized, but the city budgeted $300,000 in 2015 to move ahead on a separate plan to install a Portland Loo for the neighborhood near First Avenue and Yesler Way. 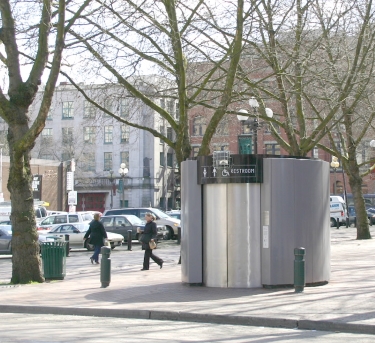 Photo by Shawna Gamache [enlarge]
This $1 million self-cleaning toilet was installed in 2004 in Pioneer Square. Four years later, the city shut it and four others down due to illegal activities going on inside.

Johnson said the toilet turned out to be financially infeasible. Connecting it to the city's century-old underground infrastructure would have blown the budget.

He said any new plans for a public toilet in Pioneer Square are now on hold.

Austin gets it right

Other cities have had more success installing public toilets.

In Austin, Texas, the city has teamed up with a nonprofit group to fund their construction.

The Austin-based Trail Foundation has raised money to install a pair of restroom structures along a 10-mile pedestrian trail that runs through downtown.

Hector Martell, the project manager for Mell Lawrence Architects, said the design was intended to be safe, durable and capable of maintaining the character of the trail system. Though the single-stall restrooms are set in a park, users range from joggers to homeless people.

Martell described the restrooms as sculptural, tent-like forms with rusty steel exteriors. The structural overhangs offer shade from the hot Texas sun, and the concrete interiors are open up top to allow breezes and emergency access.

The single-stall structures are surprisingly large: Each has more than 140 square feet of interior space, and the structures themselves are 20 feet tall.

“The size and dimensions seemed big, but really are scaled to the park setting,” Martell said.

The structures have big latching mechanisms inside that lock with a loud, satisfying noise to help users feel secure. The exterior walls don't quite meet the ground, maintaining privacy but adding security by helping users remain aware of their surroundings.

The structures cost a total of $394,000 to design and build, according to the Trail Foundation.

After a couple years of operation, reviews have been positive. That includes recognition from the American Institute of Architects, which bestowed the restrooms with a small-project award this year.

“There were some initial glitches with the plumbing, something the Trail Foundation and city were working through.” Martell said.

But since then, “we've had great feedback from the community about them.”

“We really looked at Seattle as what not to do,” Portland city staffer Anna DeBenedetto told a website for The Atlantic in 2012.

“We think it was the design that was the fatal flaw. Trying to be comfortable and private makes people feel more empowered to do the illegal activities that people do in public toilets.”

Rather than go high-tech, in 2008 the city started installing what's now known as the Portland Loo, a bare-bones, prefabricated stainless steel kiosk that exposes the feet of the occupant. Its hand-washing sink is outside, freeing up the toilet more quickly for other users. The LED lighting can be run with solar power.

The toilets cost around $100,000, plus typically another $100,000 for installation. They're fabricated by Madden Fabrication, which assembles them in its factory in Portland.

Portland has installed at least 10 of the toilets, and even Seattle has a couple at Rainier Beach Pool.

Seattle's Gary Johnson said he's been impressed with how well the toilets have functioned in Portland.

“They draw a broad range of users and have not been stigmatized,” he said.

Maintenance is low-fuss: The units are coated with a graffiti-resistant finish and are designed to be hosed down. The hose is built into the back of the unit, which is accessible with a key. In Portland, units are cleaned three times a day.

Architecturally designed restroom structures had been considered for the proposed sites in Ballard and the U District, but Johnson said the Portland Loo is a superior alternative.

“It's an off-the-shelf option that works and doesn't require staffing to be safe and welcoming,” he said.

Snafus aside, the city actually manages to operate quite a number of public restrooms that don't draw much attention.

Sometimes a little adult supervision helps, though: Seattle Parks is spending $540 a week this summer for a bathroom attendant at Capitol Hill's Cal Anderson Park, who's there on weekday afternoons and early evenings, when the restrooms are busiest.