As King County gets ‘tapped-out,' a new frontier for development forms in Snohomish County 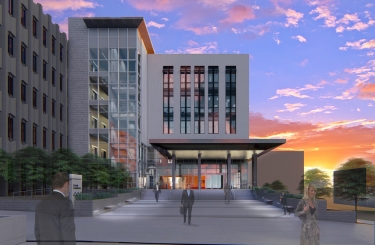 Images from CBRE/Heery Design [enlarge]
Snohomish County Courthouse will be expanded with a new five-story wing. 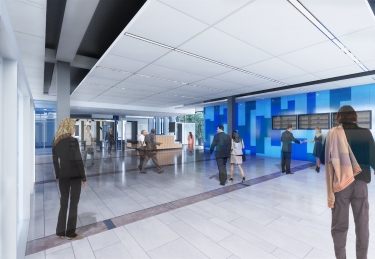 Like most subcontractor outreach events, next week's meeting for the $72 million Snohomish County Courthouse project will address the need for masonry, concrete and demolition contractors.

But the planned renovation and addition project will differ in significant ways from the average renovation project, according to Dave Jobs, a senior associate with OAC Services.

“One of the things that's unique about this project is that it's an addition and renovation to an occupied courthouse,” said Jobs, whose company is providing project and construction management services alongside general contractor/construction manager Hoffman Construction Co.

“It's unique because of the type of building it is and how it operates, so the project will require a lot of trades,” he said.

The county will be soliciting trades specializing in security and detention systems, decorative metals, signage and optical turnstile equipment, to name a few.

The job will be complicated due to several factors.

“Because it's an occupied building, it needs to be a phased construction,” said Jobs. “What would normally be a 1Â½-year project, will be a three-year project. There will be a lot of opportunity for a lot of different trades in this project.”

Snohomish County is the new frontier for development, as King County is getting tapped-out in terms of the cost per-square-foot for development, Jobs said. “Developers are looking north and finding a friendlier business environment, and it's easier to move around,” he said, referring to traffic.

Ken Klein, executive director at Snohomish County, pointed out that cities such as Lake Stevens and Marysville have grown quickly in the last decade. “A lot of cities here are encouraging growth,” he said. “Snohomish County is very weighted toward development.”

Klein said that Southwest Airlines is the latest commercial carrier to fly in and out of Paine Field in Everett, joining Alaska Airlines and United Airlines. Together, the three airlines have 24 flights departing the airport each day, he said.

Klein added that SeaLevel Properties' development at the Port of Everett, the Apartments at Fisherman's Harbor, will bring 266 units when it opens in 2020. In addition, he said the Grand Avenue Park Bridge will connect Grand Avenue Park to the waterfront when the bridge is finished this year.

Jobs said Snohomish County, being a long-time manufacturing hub with Boeing's Everett assembly plant, has the highest concentration of manufacturing workers in the state.

The county, he said, also has a high concentration of tech workers, at companies such as Fluke Corp. and Premera Blue Cross.

“People are looking to Snohomish County for more growth,” said Jobs. “That's already started to happen and we'll see more if it in the future.”