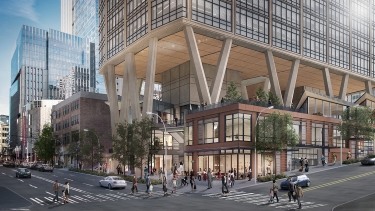 Image by Studio 216 [enlarge]
Skanska’s 2+U tower sits atop a series of structural columns to open up an inviting public space below. 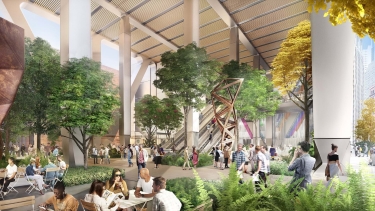 Image by Foster + Partners [enlarge]
The two-tower Oceanwide Center in San Francisco will have a public “urban room” at the base.

The tall, slanted columns supporting Skanska's 2+U tower in downtown Seattle are eye-catching, but they serve a purpose: making room for an inviting public space.

The 38-story tower, under construction at 1201 Second Ave., will be held aloft by a series of giant, Y-shaped posts, opening the space underneath to pedestrians.

Visitors will be able to cross through a terraced, low-rise “urban village” with a landscaped central plaza and 24,000 square feet of retail, bars and restaurants. The space is designed to be accessed from multiple points around the mostly full-block site, so pedestrians can pass through it from any direction.

The complex layout — which also takes into account a 30-foot grade change — reflects the desire of the developer to enhance connections between the downtown arts, retail and business districts, the waterfront and Pioneer Square.

Lifted towers like Skanska's aren't exactly new, though each one is different.

Unlike 2+U, the slender structure doesn't provide much cover for pedestrians, but retail buildings and outdoor seating areas circle the base at or near street level. (Most of the block is now under redevelopment.)

A 1977 New York Times review noted, disparagingly, that “where the building should have calmed down, at the bottom, it suddenly went wild, breaking the line of connection with neighboring buildings and creating that looming, threatening shape.”

The same year, the 59-story Citicorp Center in New York (now called 601 Lexington Avenue) was built with columns in the center of each side, lifting the tower nine stories over a church on the corner of the site. (The tower was discovered to be structurally vulnerable after it was built, and it was repaired in secret.)

Seattle developer Urban Visions had proposed a lifted tower at Second Avenue and Columbia Street, but later scaled back the proposal to a half-block site at 801 Third Ave., where a tower with a high-ceilinged ground floor and exposed structural bracing is planned.

Ron Klemencic is chairman and CEO of Magnusson Klemencic Associates, the structural engineer for 2+U. The firm's offices are in Rainier Tower.

Klemencic didn't cite his building as an inspiration for 2+U, but did say he looked at a variety of other buildings around the world, including the lifted towers in London and San Francisco, the latter of which MKA is helping design.

Klemencic said buildings like 2+U reflect design choices by developers and building owners who want to differentiate their buildings by creating better public spaces.

These spaces, which tend to include lots of retail, “invite the public to interact with the building,” he said.

The design challenges for such structures have less to do with structural engineering acrobatics than in making spaces that are interesting and welcoming.

For 2+U, a design with straight columns around the tower perimeter would have been uninviting and “not terribly interesting,” Klemencic said.

The tower's Y-shaped columns not only offer more visual appeal, they open up space by halving the number of columns.

The site also benefits from good soil conditions, Klemencic said, which enabled the excavation and other below-grade work to proceed as usual, even with the tower's concentrated structural load.

Anthony Markese, a principal at Pickard Chilton, the design architect, said his firm initially presented Skanska with three or four different ideas about how 2+U would be organized on the ground.

“The idea about the lift, pass-through and transparency immediately resonated with them,” he said.

The lifted tower will serve as a “giant umbrella” for pedestrians, Markese said, creating “this interesting in-between zone. It's outside, but still sheltered by the large overhang.”

The Y-shaped columns add to the visual drama by evoking trees or a forest, he said. The tower's underside — which will be as high as 85 feet on First Avenue — will be covered with a “beautiful ash wood,” like the underside of a boat or a wood porch, he added.

With the steep east-west slope and pedestrian entrances at different elevations, “it's going to be a very dynamic, active space,” Markese said.

Markese and Klemencic said separately that while the lifted tower is a concept that can be used elsewhere, its use for 2+U is a response to the unique conditions of the site and its central downtown location.

Klemencic also said West Coast cities tend to be more open and lighter-handed with security and building access. We're “more inclined to welcome people into our buildings,” he said, reflecting “a different sensitivity for how to treat the public.”

The climate here is also more conducive to designing indoor-outdoor spaces, he said.

Christian Gunter at Skanska said another important consideration was the unrestricted height zoning available on the Second Avenue side of the block. So lifting the tower didn't require losing buildable floor space.

Still, the addition of retail underneath the tower meant that 2+U “was almost like having two projects in one,” adding another layer of complexity, Gunter said.

Klemencic concluded that while lifted towers may represent a minor design trend, “I wouldn't say it has a lot of wind in its sails just yet.”

2+U is scheduled to be finished in mid-2019. Skanska's construction division is the general contractor.

Joining Pickard Chilton in the design are Kendall/Heaton Associates, the architect of record, and Graham Baba Architects, which is designing the retail. Swift Co. is the landscape architect.