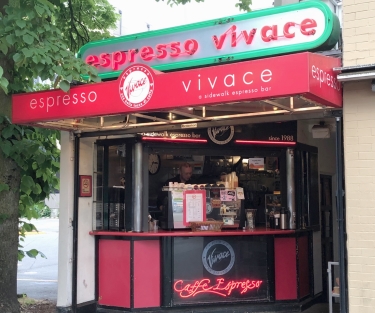 Photos from City Lights Sign Co. [enlarge]
City Lights made the original neon sign for Vivace Espresso espresso cart in the late 1980s when it was downtown. Additional signage was added after the owner moved to Capitol Hill. 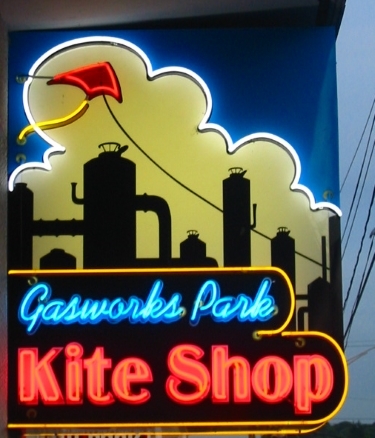 [enlarge]
A backlit and neon sign was created for Gasworks Park Kite Shop. 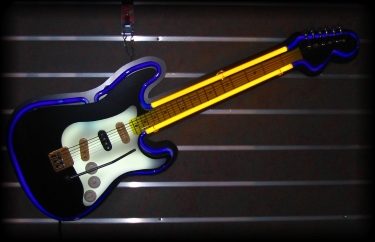 [enlarge]
This neon guitar art piece was built from a Fender Stratocaster.

Martha Davis was reluctantly managing a tennis facility in Overland Park, Kansas, when a journalist friend happened to be doing a story on the resurgence in popularity of neon signs.

The reporter invited Davis on the interview of a man who ran a neon shop and neon tube bending school, and she went, eventually taking his class and selling neon signs for him.

But Davis remembered how at home she felt visiting her grandparents in southern Oregon, so she took another leap of faith when a friend said let's move to Seattle.

It was serendipity again that landed Davis where she has been for the last 31 years. At Sea-Tac Airport, someone handed The Seattle Times to the then-jobless Davis and she did something she had never done: She perused the business section and saw an ad for someone looking for a partner in a Seattle neon business.

She answered the ad and she, Anthony Larson and another man founded City Lites Neon in 1987. The other guy was supposed to do sales, something Davis does not relish, but he left and “for 30 years that's all I've been doing,” she said.

Davis bought out Larson in 1999. The seven-person company now does business as City Lights Sign Co., working out of a warehouse in a Ballard industrial district. The work involves design, fabrication, bending neon tubing, and permitting and installing.

“We're lucky to be in Seattle,” said Davis, the company's president. “Signs are a lot more creative here than in other places.”

For a Kent restaurant and bar, it is working on LED lights that change color when a customer sits down and neon cove lighting over the bar.

For a local architect, it did a project where it appears that paint is dripping from the cove lighting.

City Lights makes portable neon signs for local businesses to advertise in their windows, such as beer signs for Maritime Pacific Brewing Co. and for Redhook when it was in Fremont. And, yes, the company will also fix up that broken beer sign you got for your man cave or she shed.

City Lights puts advertisements or business logos on vehicles, and it will make you gifts.

For instance, the wife of a cardiologist who just finished his residency had City Lights create a realistic hand-painted heart outlined in neon, with an animated EKG line going through it.

That type work is very custom, Davis said. “If somebody wants a flamingo they can go and find it online.”

Much more specialized is the Fender guitar Davis recreated using guitar parts and neon, at the request of a mom whose son was an avid guitarist.

One of the company's most difficult jobs was installing cold cathode lighting manufactured in New York in three coves in the Space Needle lobby.

This type of lighting has a larger diameter and is much brighter than neon, Davis said. Because it is high voltage and tends to arc, the ends of the cold cathode tubes have to be encased in a ceramic housing. If City Lights didn't get the lengths of tubing right, they wouldn't have fit, she said.

The company's work runs the gamut.

It repairs, services and maintains signs made by it or other companies. It also does survey, installation and service subcontracting for national sign suppliers, and it has a staff member who specializes in permitting of signs in the jurisdictions of the Puget Sound region.

Davis said all the cities in the region have different sign codes and they may have a master sign plan with some criteria that differs from the codes. “It would be nice if all the Puget Sound cities get together and could do one common sign code,” she said.

And those pesky foldable sandwich board advertising signs that can block sidewalks? It does those too.

“Those signs are illegal almost everywhere but the cities let you get away with it,” said Davis. They don't want to be liable if someone gets hurt, but believe the businesses are ultimately responsible, she said.

Davis said that her business does a lot of work in neon, but LED is becoming more popular, especially for back-lighting, as it is less costly, easier to install and is low voltage.

Also, there's the red tape that comes with a growing area.

“It takes us six weeks to produce a sign but it take us a minimum of 10 weeks to get a right of way permit to install a sign on any arterial in Seattle,” she said.

But Davis said she enjoys working with her team and helping customers draw people in with City Lights' signs.

“Not everybody can go out and see their work as they drive through the city,” she said. “That's particularly pleasing to me.”