This month, the Sheraton Seattle Hotel celebrated the grand opening of its Garden Walk along Seventh Avenue.

Once a blank concrete facade, Seventh Avenue has been transformed into a theatrical experience of light, mirrors and (in time) lush vegetation.

Sheraton Seattle asked Gustafson Guthrie Nichol to enhance the pedestrian experience along an existing structural sheer wall that presented a block-long void of urban program and pedestrian activity. GGN focused on the context of the site, its historic setting within the neighborhood, and its relationships with the surrounding community, such as the Seventh Avenue retail district, the ACT Theater and Freeway Park.

As a result, the recently completed streetscape is designed to complement the urban fabric, while also amplifying its connections to its unique surroundings in a way that is playful and engaging.

GGN’s design “borrows” key pedestrian assets from across the street and playfully simulates a traditionally two-sided street. A series of massive mirror panels — emulating vertical architectural bays in scale and proportion — are strategically placed to present the illusion of rich historic facades on the face of the simple concrete wall.

The mirrors reflect the historic facade of the Eagles Auditorium Building across the street, thereby replacing the blank wall of the Sheraton with the illusion of a much grander sense of architecture. The width of the mirror panels subtly offers the familiar module of storefront windows to passing pedestrians. The mirrors also “double” the apparent pedestrian activity on the treated side of the street.

The intent of the Sheraton Garden Walk is to create the illusion of being surrounded by green without truly enclosing the space — transitioning from a typical city sidewalk to a more welcoming, garden-scale environment that emphasizes “people space” over “car space.” 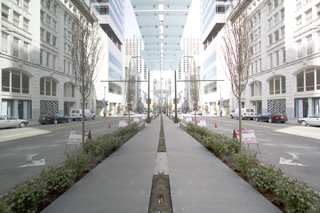 Photo courtesy of GGN [enlarge]
The Eagles Auditorium Building is reflected in mirror panels that make up part of the Garden Walk.

In order to balance the mirrors with reality, they are framed by rustic texture and seasonal interest, provided by vines that will soon grow to clad the remaining concrete facade. As they grow in, the lush plantings will wrap and embrace the sidewalk environment for maximum effect.

The ground plane consists of low evergreen plantings, interspersed with swaths of colored flowering plants, as well as street trees. The decision to use smaller-scale pavers rather than the city’s standard concrete contributes to a more textured and intimate environment.

Pedestrian canopies were added to the streetscape in order to shelter the sidewalk and bring a more comfortable human scale to the pedestrian realm. Rotating colored lighting displays will create a festive atmosphere during the holidays.

Most importantly, the canopies were strategically placed to frame southern views of bluebells, part of Ginny Ruffner’s “Urban Garden” sculpture commissioned by the Sheraton Seattle Hotel’s ownership group. The bluebells are now the primary view at the end of the Seventh Avenue axis — not a loading dock.

On the corner of Seventh Avenue and Union Street, a pocket park is created with larger scale seating and a change of pavement texture, creating a foyer for the Garden Walk.

Creating a direct line of view to the sculpture from Pike Street adds a visual connection from one end of the block to the next. Lighting highlights the sculpture and illuminates the pocket park, creating a nighttime mood and allowing for safe use after dark. A large built-in bench at the base of the sculpture provides a meeting space.

Benches also were installed along the streetscape to punctuate the length of Seventh Avenue and provide places to sit and gather. Their placement is tactical — they are located across from the mirror walls — enabling people to further engage with the reflected architecture and landscape.

Many unseen sustainable benefits are contained within the design. Among them, the continuous open tree planters collect 75 percent of the rainwater from both the canopy and the sidewalk, thereby decreasing stormwater runoff. Also of note, the trees benefit from an engineered structural planting soil under the sidewalk that increases root space and improves tree growth.

The Garden Walk strives to incorporate human interaction, delight and playfulness in the midst of a bustling city environment. The newly completed environment was celebrated with a dedication ceremony and community garden party on July 21, which featured speeches by the hotel’s owners and Deputy Mayor Darryl Smith. Attendees were delighted with strolling entertainers, prize giveaways, a first glimpse of the “Urban Garden” in motion and a surprise flash mob.

The GGN project team was able to transform this small stretch of Seventh Avenue from a non-descript city sidewalk into a welcoming pedestrian environment that complements the rest of the street. What was once the Sheraton’s back-of-house, the Garden Walk creates a lively place that people will notice and enjoy.

Jennifer Guthrie is a founding partner of Gustafson Guthrie Nichol.