The block between First and Second avenues and Second and University streets is going to grow up quickly, adding another office tower called 2&U to Seattle's skyline.

Building on this block in the heart of the city is a huge opportunity, and the developer, Skanska USA Commercial Development, seems determined not to waste it.

We haven't seen design this ambitious since the Seattle Central Library. If early promises are delivered, 2&U will be both a 38-story landmark and a good neighbor.

“Downtown is a neighborhood, but it hasn't really even been formed as a neighborhood,” said Lisa Picard, Skanska's regional manager and leader of the 2&U team. “A monolithic block is really a kind of obstruction to humanity.”

This tower's going to be different. For one thing, people will be able to walk under it. 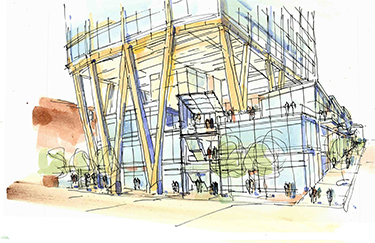 Courtesy of Skanska and Pickard Chilton [enlarge]
The design for 2&U continues to evolve. The stakes are high, but the team sees a big opportunity to link Pioneer Square, Pike Place Market and the waterfront.

Photo by Clair Enlow [enlarge]
Character buildings along Second Avenue will be demolished to make way for 2&U, but some pieces may be recycled to form a “village” at street level. 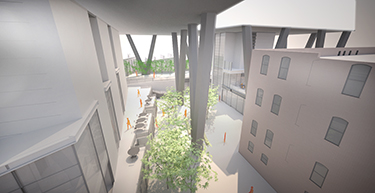 Courtesy of Skanska and Pickard Chilton [enlarge]
The 38-story tower doesn’t grab too much attention on the skyline. Most of the action is at the base. This simulation shows part of the walk-through area.

New development will cover roughly three quarters of the block. Early design studies show a tower lifted up on legs, with a village underneath. Picard said there will be no thatched roofs, and don't worry, it's definitely not U-Village either.

The goal is for the complex to invite pedestrians from many angles and let them choose a path through it, all without leaving the open air or passing through a door.

The stakes are high. Now on the site along Second Avenue are two century-old “character” buildings. We will miss the dignified Galland Building and its red brick neighbor the Seneca Building. Both are owned by Samis Foundation, which has given Skanska a long term lease. The red brick Diller Building, on the corner of First and Seneca, has a different owner and will live on as part of the redeveloped block.

The project team is clearly trying to enhance the public realm and give back to the city, so it's no wonder the Seattle Design Commission seemed to be giving the project a nod as they looked at it for the second time last month. Approvals seem to be on schedule for construction to start in August of 2016, with completion set for late 2018.

Skanska hired Pickard Chilton of New Haven as the design lead, with Kendall/Heaton Associates of Houston as architect of record. Seattle's Graham Baba Architects is also on the team, and the local landscape architect Swift Company has collaborated from the beginning, helping to determine how the structure will meet the ground and lay out the paths underneath.

If it lives up to the early visuals, the base of 2&U could become a hub between Pioneer Square and the area around Pike Place Market, now dubbed the West Edge. It promises to pull traffic from the waterfront via Harbor Steps at First and University. Seattle Art Museum and Benaroya Hall (with the University Street transit station underneath) fill the blocks to the north and northeast. Across Second Avenue is the plaza at 1201 Third Avenue.

Up to the challenge

The current design for 2&U lets you can see through the base at some angles. The big idea here is the lift — the structural heroics of holding a tower off the ground.

It would be rooted to the ground through a pair of service cores, but there are also a number of columns that would support the building from various points on the sloping site so that it clears the ground by a few stories. These columns would not be straight up and down, but slanted at different angles. The uncanniness of the architecture should be part of the lure of the block.

Space under the tower will be privately owned of course — but the idea is to make it inviting even to those who are not spending money. A shortcut through the block should be reason enough to walk through 2&U — especially on a rainy day — but there will be others such as stores and places to linger.

As with any park or successful public space, design will be doing some heavy lifting, but it can't do everything. Programming is key to keeping the space lively and inviting. A series of community forums are intended to get a sense of what surrounding stakeholders want to see happening on the block. “We want to make sure that we get it right,” said Skanska's Christian Gunter.

The Diller Building will add some memory and grit on the corner, standing slightly apart. Skanska has asked the city for a partial vacation of the alley through the block to accommodate the L-shaped building. Eliminating part of an alley brings extra scrutiny in city reviews, but the revised alley will offer service access and become part of the pedestrian network.

“Are we getting rid of the alley? I don't think so,” said Jim Graham of Graham Baba. “We're making it better.”

What remains to be seen is how the design and development team is going to pull off the drama of the lift. That has a lot to do with what's built under the legs of 2&U. It's fine to call it a village, but traditional villages grow incrementally and unevenly.

The design team is playing with various roof slopes under there. Graham and other designers on the team seem rightly determined not to imitate a cute one-story town. Some drawings show a sawtooth profile; others show a more squared-off composition. Members of the team have said they will use pieces of the demolished buildings in visible ways.

As the design evolves, we can count on seeing roofs ramps and walkways intermix in interesting ways. There will be a central plaza, maybe with moveable furnishings.

If it works, the block could become an open-air mixing chamber and an urban place unlike any other in the world. If it doesn't — well, we'll sure miss the Galland and Seneca buildings.