Wastewater plant cleaned up for the 21st century

Aging infrastructure, environmental regulations and population growth are the impetus for recent upgrades to water and wastewater treatment plants in the Pacific Northwest. Local companies, such as Mortenson Construction, are using building information modeling (BIM) to improve plant efficiencies by incorporating new systems and technologies.

The state Department of Ecology continues to reform its water management policies and practices to help meet the increasing demands for water in a time of limited water supplies. Methods for sustainable water resource management are continually being developed to meet both the present and future needs of our growing communities, as well as to protect our natural resources. This, in turn, has required enhancements to some of our aging water and wastewater facilities.

One example of this is the Budd Inlet Treatment Plant in Olympia, which has structures dating back to the 1940s. Mortenson Construction and HDR Engineering joined forces to work with the owner, LOTT Clean Water Alliance, on updates to sustain the life of the plant. LOTT’s $109 million master plan outlines a goal to make the plant a modern, cutting-edge facility and increase its water recycling capabilities by 2018.

Due to recent upgrades, the plant has the ability to produce Class A reclaimed water and reuse by-products from the process. In fact, the reclaimed water from the treatment plant is suitable for all public contact, except drinking, and is used throughout downtown Olympia. The state Department of General Administration plans to use the water for irrigation at Capitol Campus and local parks in addition to outdoor water features. 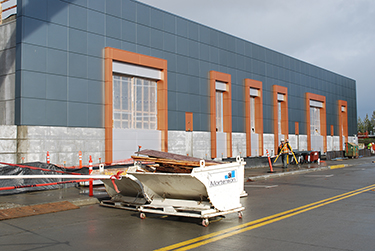 Photo courtesy of Mortenson Construction [enlarge]
The east facade of the Budd Inlet primary sedimentation basin building was designed to be community-friendly.

With the upgrades, the reclaimed water will also play a role in public outdoor education at the Hawks Prairie Pond site and be used for toilet flushing at the new Hands On Children’s Museum nearby.

The treatment plant is a state-certified laboratory, which tests and monitors the water through each step of treatment. The plant is equipped to recycle and reuse by-products, such as methane produced from waste handling, to generate electricity that fuels the plant. Biosolids collected during the process are taken off-site for treatment and used as soil amendment or fertilizer for non-food crops. 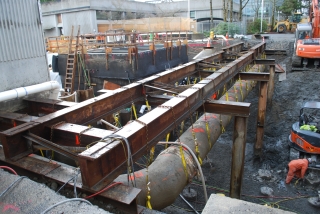 [enlarge]
Temporary supports were put in place to ensure the existing piping remained intact during construction.

Mortenson Construction recently completed the $37 million renovation of the primary sedimentation basins, which is where the initial screening of the wastewater occurs. Large channels were developed to segregate where the solids sink, leaving the clear water to continue to the next stage of treatment.

The current primary sedimentation basins were constructed in the late 1940s and while the structure remained intact, the basins were creating a lack of “flow-through capacity,” compromising the treatment performance of the water and threatening to leak sewage in downtown Olympia. The new primary sedimentation basins not only increase the plant’s treatment capacity, but also increase the safety and efficiency of the plant. 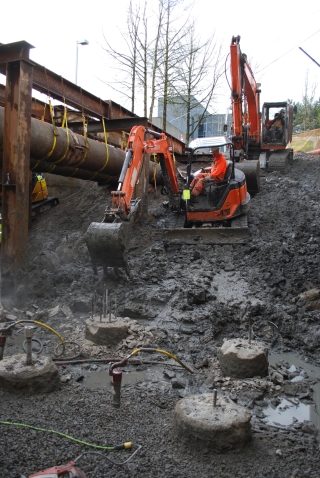 [enlarge]
Careful excavation had to be done around existing structures.

Mortenson and HDR used the BIM model to minimize conflicts with existing systems, as well as to design and coordinate LOTT’s new utilidor. Through the use of BIM, the team was able to bring the piping and electrical conduits in the utilidor to fabrication-level detail.

The team created a detailed project schedule to keep the plant fully operational throughout the two-year construction process without jeopardizing the treatment processes. Construction required significant excavation and environmental cleanup. Under the voluntary cleanup work plan approved by the state Department of Ecology, soil and groundwater testing was continually conducted to ensure that no contamination occurred throughout the construction process.

The treatment plant is next to the East Bay District in Olympia, and because of the close proximity to organizations such as the Hands on Children’s Museum, the facility is being equipped with cutting-edge odor control systems and security while maintaining a community-friendly facade.

Tom Paul is construction executive of environmental work at Mortenson Construction, a national general contractor with a local office in Kirkland focused on renewable energy, alternative project delivery and innovative use of technology.