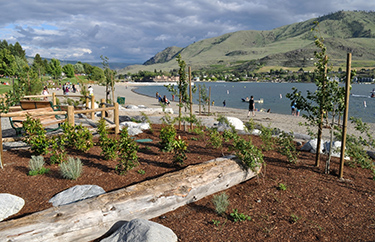 Specialty: Geotechnical and environmental services related to transportation and buildings

A few years ago, as the Obama administration sought to give the economy a bump by funding hundreds of billions for construction projects around the United States, the geotechnical and environmental consulting firm Shannon & Wilson also saw an uptick in business.

Transportation projects funded by the state and federal government in the post-2008 recession meant more business for Shannon & Wilson.

But Gerard Buechel, Shannon & Wilson’s president, said those projects are becoming few and far between. He said a lack of federal funding has significantly slowed the investment in major public transportation projects. “We’re looking for opportunities to help keep our people busy,” said Buechel.

Speaking by phone from Hawaii, Buechel said Shannon & Wilson’s revenues for this year will be up slightly and the firm has avoided laying off employees. Buechel was in Hawaii working on a $5.3 billion project for the Honolulu Rail Transit, providing geotechnical services.

Buechel said each of Shannon & Wilson’s offices is busy pursuing local projects. The firm’s office in Los Angeles, for example, is pursuing projects for the Metropolitan Transportation Authority. He would not comment on two particular projects they are pursuing, but said: “There’s a significant amount of transportation work in Southern California.”

Locally, Shannon & Wilson continues its geotechnical work on the Alaskan Way Viaduct replacement project, as well as the state Route 520 bridge project. Buechel said the firm’s work on the Columbia River Crossing project — the Interstate 5 bridge project connecting Vancouver to Portland — is on hold due to a funding gap.

Other big recent bridge projects for Shannon & Wilson include the Tacoma Narrows and the Port Mann bridges, for which the firm provided geotechnical consulting.

Buechel said the firm is looking for other similar design-build projects to consult on.

While federal funding has significantly slowed, Buechel said the firm is seeing a steady rise in private sector work. “We are seeing an increase in commercial development,” he said, and that means more geotechnical and environmental consulting work. “And we think there’s more out there.”